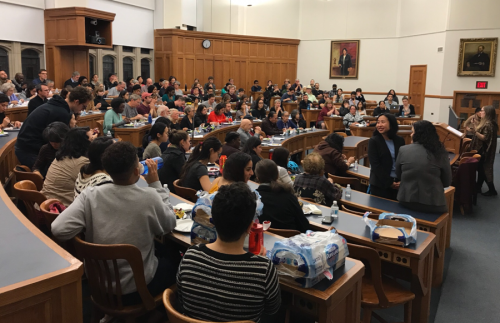 On Wednesday, October 17, the Yale Group for the Study of Native America (YGSNA) and the Native American Law Students Association (NALSA) co-hosted a screening of the award-winningdocumentary film Dawnlandand a panel discussion with five distinguished guests. The film, which will be aired nationally on PBS on November 5, drew over a hundred Yale students, regional Native American community members, and New Haven residents to the Yale Law School.

Dawnland follows the evolution and development of the Maine Wabanaki-State Truth and Reconciliation Committee (MWTRC). The first state-sanctioned committee of its kind, members of the MWTRC traveled to Maine tribes between 2012 and 2015 and gathered testimony from over one hundred Native people who were placed into white families in the latter half of the twentieth century. “The truth hurts. The truth is very painful,” says a Penobscot man as he begins to recount his experience of being stripped from his Native family by government social workers as child. The film makes it clear that truth of this kind is unavoidably painful, distressing, and raw. 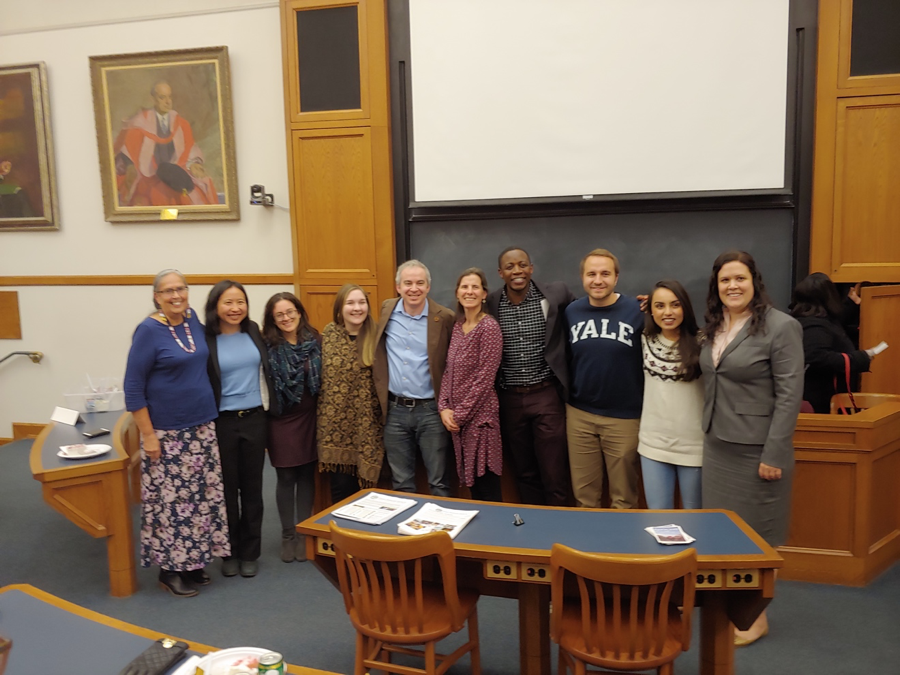 Dawnland Panel Participants with students from Yale School of Law and Native American Law Student Association.
One of the palpable tensions that surfaces throughout the film is the uneasy relationship between notions of “truth” and “reconciliation,” especially in light of community and individual trauma and the lack of awareness about this history on the part of non-Native communities. A number of unsettling questions are raised by the film: What are the ethics of truth-telling, and who is willing to listen? What is reconciliation, who benefits from reconciliation, and how is this similar or different than healing? And of course, how do state agencies and Native nations negotiate the process by which testimony is told and to what ends?

To address these and other probing questions, Mallie Tavepholjarern, NALSA alum and Associate Counsel of the Alaska Native Tribal Health, facilitated a discussion with a distinguished panel of guests. Adam Mazo, the producer of Dawnland,offered insight into the creation of the film and the ethical and narrative decisions that had to be made in the process. Esther Anne, who is the co-Director of Maine Wabanaki REACH and a vital Native partner in the MWTRC’s work, spoke about her role as a Native advocate for concerns in the TRC and also about the ongoing work of addressing historical trauma among Maine’s Native populations. Jami Johnson, a former NALSA President, bought a legal analysis to the issues raised in film, focusing in particular on the Indian Child Welfare Act (ICWA) as well as her work with Native communities as a Federal Public Defender in Arizona. Sandy White Hawk from the First Nations Repatriation Institute concluded by sharing her experiences as one of the Native members of the MWTRC – a role to which she brought a lifetime of wisdom and struggle as a person who was taken from her Native family as an infant by state agents and has tread the long path of healing and reconnection with her kin.

Despite the violent history brought to light by the TRC, the film powerfully underscores the tenacious resilience of Native nations and the determination of Native people to make their stories known for the sake of current and future generations: “This country had an official policy to remove Native children from their homes and place them with white families so that they would learn how to be white. But we’re still here. And many of our people have never, ever shared their stories.”

The Dawnlandproject has also created an exceptional viewer’s guide and a comprehensive teacher’s guideto encourage communities across the country to develop deeper awareness of the historical and current challenges faced by Wabanaki tribes and other Native nations, and, most importantly to emphasize the point that cannot be made often enough: Native people are still here.