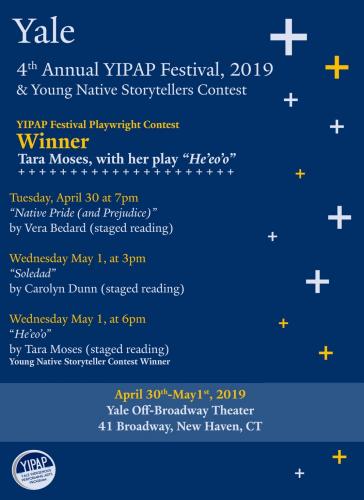 The Yale Indigenous Performing Arts Program (“YIPAP”) is thrilled to announce this year’s winner of the Young Native Playwriting Festival, Tara Moses, for her play HE’EO’O. Tara Moses, a citizen of the Seminole Nation, is a young playwright based in Tulsa, Oklahoma.

In HE’EO’O, Tara Moses takes us back to a time when the United States government thought it could fully eradiate Tribal Nations and their citizens. Following the early morning attack by the 7th U.S. Calvary lead by Lt. Col. George Armstrong Custer, the surviving Cheyenne women await their impending doom. Fueled by her desire to lead her people, avenge her father’s death, and the spiritual support of the Great Spirit Maheo’o, Walking Woman remains resilient. Inspired by TROJAN WOMEN by Euripides, HE’EO’O (hey-yo) asks the question: when white men, when Americans write the history books how will we know the truth?

“We are very excited to work with this year’s winner, Tara Moses,” states Mary Kathryn Nagle, Executive Director of the Yale Indigenous Performing Arts Program. “Her voice brings the truth of our survival to the forefront, in a powerful way that, in most theaters across the United States, has only been historically silenced.”

Moses’ play will be shared publicly in the form of a staged reading on May 1, 2019, at 6:00pm at Yale University, as a part of the Fourth Annual YIPAP Storyteller Festival.

Carolyn Dunn’s Soledad features the story of a socially awkward high school senior high school senior, Soledad “Sunny” Sixkiller, who discovers her father was a prize-winning pow-wow singer, but whose grief over the disappearance of his wife  (his daughter’s mother) has turned him inward. Sunny finds, by accident, her father’s old pow wow tapes and vows to learn his songs in order to bring him back to life.

And in Vera Bedard’s Native Pride (and Prejudice), Eliza Bennett and William Darcy ae navigate the pride and prejudice of today’s Alaska Native village life - except they are doing an exceptionally poor job at telling the story. The legendary Raven must save the day (and the story) to ensure there’s a happily ever after. Or at least to get everyone home on time.

“Every year the YIPAP Storyteller Festival brings some of Indian country’s brightest and best talent to Yale University,” states Kelly Fayard, Dean of the Yale Native American Cultural Center. “Our students benefit from the exposure to talented Native artists using their talents to address our erasure in American society at large.”

The Festival will begin Tuesday night, April 30, 2019, with a 7pm staged reading of Vera Bedard’s play, Native Pride (and Prejudice).

On Wednesday, May 1, at 3:00pm, YIPAP will host a staged reading of Carolyn Dunn’s play Soledad.  And the Festival will conclude Wednesday evening, with a winner of this year’s winning play, He’eo’o, by Tara Moses. He’eo’o will begin at 6:00pm.

All readings will be directed by Jocelyn Clarke, and will be located at the Yale Off-Broadway Theater, at 41 Broadway, New Haven, Connecticut.  Attendance is at no cost and seats are first come first served.