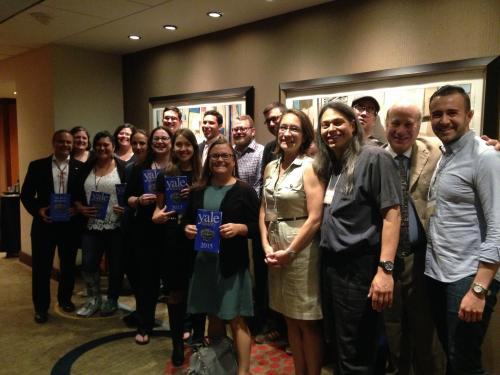 Regional tribal as well as national leaders welcomed the association at the National Museum of the American Indian on the National Mall. Celebrating the ongoing vibrancy of both the museum and the association, NMAI Director Kevin Gover shared his excitement about the association’s impressive growth and encouraged continued partnerships between academic and museum communities. He pointed to the recently opened NMAI exhibition “Nation to Nation: Treaties Between the United States and American Indian Nations” as an example of such collaborations. Other conference highlights included an evening performance by the “1491s,” the stand-up comedic Native performance troupe as well as the U.S. premiere of “Trick or Treaty?” the latest National Film Board of Canada film by Abenkai film-maker Alanis Obomsawin.

For the first time in its history, YGSNA hosted an informal reunion of current and former members. Including incoming NAISA President Jace Weaver and five Henry Roe Cloud Fellows, this gathering provided members the chance to share recent successes, to meet Yale alumni and former YGNSA leaders, and to learn about the group’s evolution over time. Yale University Press generously helped to support the gathering and also hosted a book launch for former YGNSA member Joshua Reid, whose 2015 study, The Sea is My Country: The Maritime World of the Makahs, was published by the press.