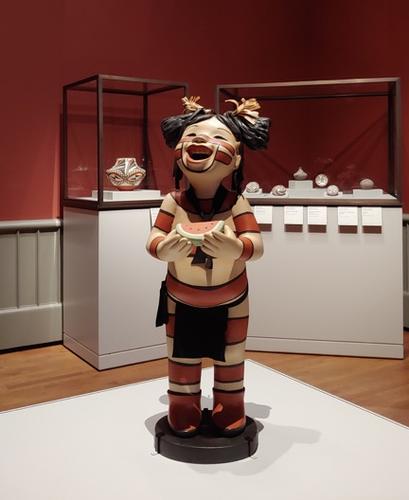 The current Yale University Art Gallery exhibition, Pueblo Women’s Ceramics from the Patti Skigen Collection, received recent coverage in the Yale Daily News. The article highlights several important aspects of the exhibition, which was installed in May and will be up for the academic year. The exhibition seeks not only to celebrate the artistry of Pueblo women potters but to contextualize their work. It shows how pottery, while regarded as contemporary art, is an important means of sustaining vital relationships within Pueblo communities. The exhibition was curated by Kaitlin McCormick, the 2018-19 Andrew W. Mellon Post-doctoral Fellow in Native Amerian Art and Curation who worked in close collaboration with YGSNA member Anthony Trujillo DIV ’19 (Okhay Owingeh Pueblo). Trujillo’s aunt, Linda Tafoya Sanchez, has a piece in the exhibition. It is a part of a larger tradition of contemporary and traditional artistic practice among Pueblo communities. As Trujillo states: “The pottery exhibited here are part of [the] whole life system of Pueblo people,” and the pottery themselves “reflect the ‘political, territorial and cultural sovereignty’ of the pueblos.”

The YDNarticle additionally highlights the productive curatorial and educational possibilities that open when Indigenous art is taken seriously and when Native people and communities remain actively involved in shaping an exhibition. Over the summer, for example, Trujillo conducted interviews with three contemporary Pueblo potters whose works and communities are represented in the exhibition: Kathleen Wall of Walatowa, Jemez Pueblo who situates her work within a strong, matrilineal network; Linda Tafoya Sanchez of Santa Clara Pueblo who shows the time-consuming, careful process of creating a vessel from processing clay to firing; and Governor Brian Vallo of Acoma Pueblo, a potter himself, who speaks to the cosmological, historical and political dimensions of Pueblo pottery. These videos will be installed in the exhibit and posted online by the end of October. For Trujillo, it was important to conduct the interviews in an organic conversational manner and in environments where the artists felt most comfortable and at home with their work. As a result, there is a sense of everydayness and familiarity to the interviews that, according to the article, helps to “dispel ‘romanticized notions’ about the lives of Native people.”

According to Trujillo, one facet of the exhibition that received less attention in the YDNarticle are the ongoing conversations that have brought this exhibit to fruition.  “The process,” he comments, “is just as important and instructive as the finished product.” Trujillo has been in conversation with the Pueblo artists to ensure that the videos accurately represent their work and what they wished to convey in the interviews. Additionally, he, Kaitlin McCormick, Mark Mitchell, Curator of American Paintings and Sculpture, John ffrench, Director of Visual Resources, and Liliana Milkova, Curator of Education and Academic Affairs have also been in extended discussions about how to bring this exhibit to life in a way that honors and centers Pueblo communities and, most importantly, Pueblo women. At the conclusion of the article, Trujillo expresses his hope that this exhibit will complement the expansive, Native student-curated exhibition, “Place, Nations, Generations, Beings: 200 Years of Indigenous North American Art,” opening at the YUAG on Nov. 1.