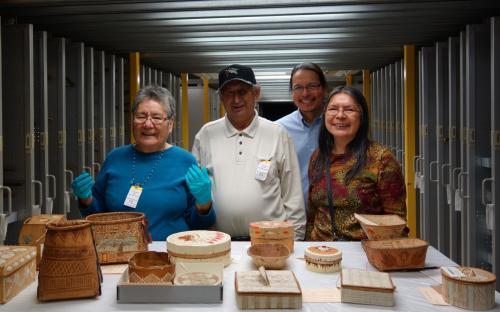 Renowned art historian, Ruth Phillips, will be a visiting faculty member in Yale’s History of Art Department this semester, teaching both undergraduate and graduate courses in Native American arts. One of the leading figures in the field, Phillips has taught for many years at Carleton University in Canada after having worked at the University of British Columbia, among other institutions. With a particular prominence in Great Lakes Indian arts, Professor Phillips has worked for decades with Native artists and communities, including those featured here with some of the Smithsonian Institution’s Great Lakes Indian basketry and quillwork. (l to r: Mina Toulouse, Ted Toulouse, Alan Corbiere, Mary Ann Corbiere)

In addition to developing her two courses, Professor Phillips has worked closely with the History of Art faculty and staff, the Native American Cultural Center, and the Yale Group for the Study of Native America to bring over half a dozen guest artists, curators, and scholars to campus. Including prominent museum directors, such as Aldona Jonaitis from the University of Alaska Museum of the North to Cayuga beadwork artist Sam Thomas, eight “Native American Arts at Yale-Spring 2017” presentations, art sessions, and/or panel discussions will complement Phillips’ two courses. Such focused coursework, discussion, and visiting arts programming are unprecedented and intersect with increased campus-wide discussions about the growing importance of contemporary Native American arts, museum representation, and curatorial work. Such conversations have occurred over the past year and have included leaders from across Yale’s museum community, including the Peabody and University Art Gallery.