Sovereignty Project Files Brief in Brackeen v. Haaland with the AHA and OAH 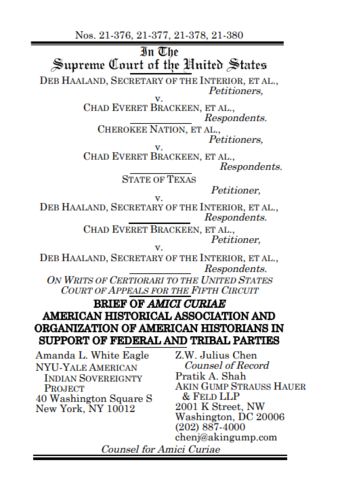 Members of the project, including students from NYU, Yale, and Stanford, worked with Akin Gump to file this brief. Fourteen graduate and undergraduate students from across disciplines collaborated with the Project’s seven law students to begin work on the brief in the fall of 2021, completing more than twenty-five initial memos around broadly defined research questions. These memos were then condensed, and an additional team of students supplemented the original historical research with additional legal and historical research this summer. Law students worked closely with Project leadership and firm partners in bringing the brief to completion, including drafting specific pieces of text for the brief.

The case is scheduled for oral argument before the Supreme Court on November 9. In the lawsuit, several plaintiffs are challenging the constitutionality of multiple provisions of the Indian Child Welfare Act (ICWA), a forty-four-year-old federal law protecting the best interests of Indian children and families. Clinical fellow Amanda White Eagle explains, “ICWA has been recognized as the gold standard of child welfare practice for all children, and this case poses a significant threat to Indian children, families, and tribes.” Though the facts of this case involve ICWA, a holding even portions of the Act unconstitutional could threaten the constitutional status of other areas of federal Indian law, stripping away other protections for tribes and chipping away at the sovereignty of Native nations. The significance of this case is illustrated by the immense support for upholding the act, including twenty-one amicus briefs.

The Project’s brief details the historical understanding and practice of federal and state power over Indian Affairs and the welfare of Native children, as well as the historical context leading to and surrounding the enactment of the Indian Child Welfare Act. As described, the federal government has exercised authority over Native children since the founding of the United States, and early efforts to provide education to Native children in the early nineteenth century grew into a nationwide program under which the federal government created and ran boarding schools. The brief goes on to describe how states and local governments were complicit in the creation and operation of boarding schools: states and localities sold the land upon which the schools were built and provided services to the schools, seeing Native children as a source of additional revenue rather than a responsibility.

As the brief describes, states grudgingly took a more affirmative role in administering federal welfare programs for Native children. However, because states refused to incorporate Native people into their general welfare programs, they approached the care of Native children from a narrow and cost-saving perspective.  In an effort to reduce welfare costs that the states thought were burdensome, states began to remove Native children from their homes at unprecedented rates.  The motivation was not race, but simple economics.  Because Native children required fewer welfare dollars when placed into a middle-class or wealthy foster or adoptive home, it was less expensive to place them in those homes than to support a Native family living in poverty—especially Native families to which states continued to refuse general welfare services and wraparound support. As a result, over the 1950s and 1960s, state and local governments removed 25-35% of Native children from their parents. Those Native children were raised in homes with no political, cultural, or linguistic connection to their nations.  The alarming rate of removal of Native children eventually led to the passage of ICWA in 1978.  During roughly the same timeframe, the United States implemented the Vienna Convention on Consular Relations, which includes and codifies protections for the interests of foreign national children between sovereign states.  Both ICWA and the Vienna Convention require that state courts:  identify children subject to the respective law; notify the child’s potential other nation (keeping records of that notice); collaborate with the representative of the child’s nation; and provide a guardian.  States must recognize the constitutional underpinnings as they are necessary for the implementation and success of both laws. In addition, the Project’s brief highlights that ICWA must also be viewed against the complete historical record of federal and state power over Indian Affairs and the welfare of Native children.  Such record demonstrates, the care and education of Native children falls squarely into the constitutional powers of Congress, and the Project was honored to support the AHA and the OAH in their position that the Supreme Court should uphold the challenged provisions of ICWA in full.