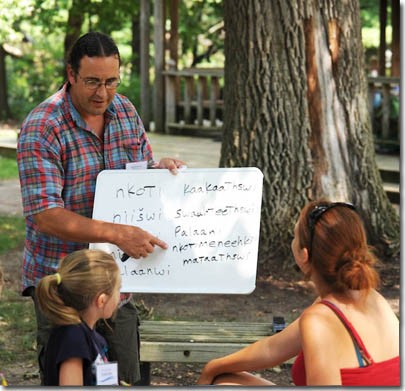 Health disparities have long plagued Native American communities, families, and individuals, leading many Native American professional health experts to proclaim physical health concerns to be a major crisis. Yale Linguistics researcher Doug Whalen agrees and has joined Native American health and linguistics professionals, Professor Margaret Moss from the University of Buffalo and Miami University Professor Daryl Baldwin, (photographed here), in a recent essay that examines the positive physical health effects of Native American language use. “Language transmission,” as they write, “is a particularly effective means of reinforcing culture and has the benefit of integrating most cultural and communal activities. Language is also an extremely efficient means of establishing membership or inclusion in a community. Studies that might disentangle language and culture are possible, but the approach argued for here takes it as a given that language is the most efficient means of transmitting, maintaining, and even reviving culture.”

Entitled “Healing Through Language,” this work summarizes existing scholarly assessments that measure the health outcomes for Native American language use. It also identifies key positive effects of such language practice. As they conclude, “Language programs in (Native American) communities hold the promise of improving the mental and physical health of those who participate in them. All generations seem able to take advantage of this possibility. Data exist on palliative effects of use of a Native language and/or cultural practices on smoking, suicide rates and alcohol and substance abuse, but many more issues are likely to be evident as more data are collected.”

Whalen has extensive experience working on Native American language preservation, particularly through the Endangered Language Fund (ELF), which he helped to lead for over two decades. The Healing Through Language project is a program within the ELF that attempts to facilitate the support and assessment of language programs with particular emphasis on the mental and physical health attributes gained through Indigenous language use.