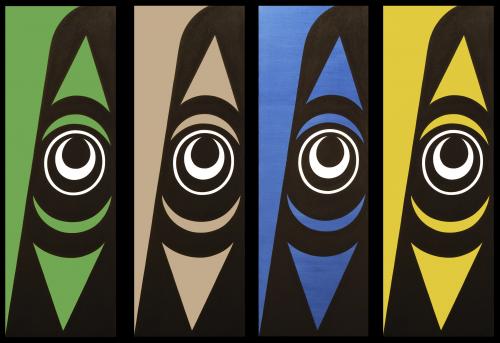 YGSNA faculty coordinator Professor Ned Blackhawk and former YGSNA member Dr. Isaiah Wilner have co-edited a “revelatory and transformative volume” that interrogates the network of Indigenous, colonial, and non-Anglophone subjects, among others, who helped to build the intellectual tradition known as Boasian ethnograhy. Just released by Yale University Press as volume 8 in the Henry Roe Cloud Series on American Indians and Modernity, Indigenous Visions assesses the making of modern anthropology through the lens of Franz Boas and members of what the volume terms the “Boasian Circle.”

As is well known in the history of anthropology, Franz Boas in the early twentieth century institutionalized his methods across an emerging discipline, helping to establish America’s first university departments of anthropology. He also trained a diverse group of men and women—including Margaret Mead, Ruth Benedict, Zora Neale Hurston, Melville Herskovits, Ella Deloria, A. L. Kroeber, and Edward Sapir—many of whom, like Boas, were racial, religious, or sexual outsiders. As they gained influence, they also contributed to the reconfiguration of American racial politics. The Boasian tradition, which began among Indigenous peoples from Baffin Island to imperial Siberia, increasingly produced continued insights about the diversity of the human experience, while steadily building status for its practitioners. Indeed, inheritors of one or another strand of this tradition came to be regarded as the founding figures of many national scholarly traditions—including Gilberto Freyre in Brazil, Manuel Gamio in Mexico, Marius Barbeau in Canada, and Claude Lévi-Strauss in France.

In contrast to Boas’s wide reception, little attention has been paid to his many collaborators. This anthology considers such influences and pays particular attention to the under-recognized centrality of Indigenous peoples in the making of the Boasian tradition. Through the interactive relationships established with Boas and other anthropologists, Indigenous peoples developed insights that have extended across national communities, germinating developments from history to linguistics, literary studies, philosophy, and social theory. To take just one of many possible examples, after the Second World War Kwakwaka’wakw ideas about gift-giving and reciprocity, first expressed to Boas decades earlier in British Columbia, contributed to a new rhetoric of decolonization and anti-capitalist critique. Ranging from the works of Marcel Mauss to that of Guy Debord, ideas about gift economies and communal redistribution became centrally lodged into Continental philosophical debates about the meanings of value, language, as well as expression. These ideas became so ubiquitous that Parisian students in 1968 named one of their leading journals, Potlatch, based on Northwest Coast Native cultural and ceremonial practices. Ideas, such as these, became only one of the many ways that Native peoples helped to reframe the currents of western metaphysics, doing so by drawing both upon their own cultural values and experiences under colonial rule.

As Wilner and Blackhawk’s introduction relays, “a little bit more than a century has passed since 1911, when Franz Boas first introduced his modernist ideas in a burst of landmark publications—The Mind of Primitive Man, ‘Changes in Bodily Form of Descendants of Immigrants,’ and the Handbook of American Indian Languages. Each disproved the dominant racial ideology of its time through careful reconsideration of then operative assumptions about human difference and the supposed inferiority of Indigenous peoples. The centerpiece of this effort was The Mind of Primitive Man, a book of essays drawn from Boas’s study of Native societies. While the very colonizing outlook that the book attempts to critique stands today in its title, its contents both reveal the makings of the Boasian tradition and helped to inaugurate the century of cultural inquiry that he helped to establish. More than any of his works, this title encapsulates the simultaneous opportunities as well as limitations inherent in what has become known as “cultural relativism.”

An event to celebrate the release of Indigenous Visions will take place in room 401 of the Hall of Graduate Studies on Monday, April 23rd from 4-6 P.M. More information can be found at this link.

See this link for volume contents and more.