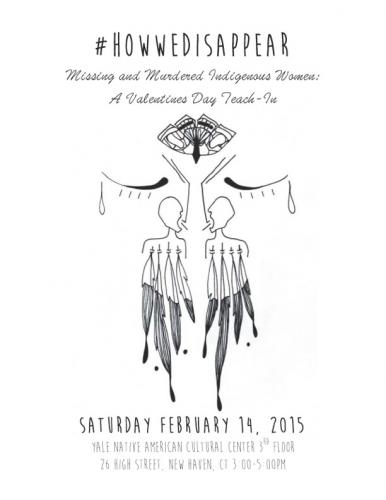 This Valentines Day, inspired by and in solidarity with Indigenous grassroots activists in Canada, the newly formed undergraduate student organization YSAN (Yale Sisters of All Nations) co-sponsored a teach-in honoring missing and murdered Indigenous women. Beginning in the early 1990s, Indigenous women in Vancouver began marching on February 14th to honor the memory of women from the Downtown Eastside lost to physical, mental, emotional and spiritual violence. Their efforts inspired similar actions across Canada and have encouraged organizations within the United States, including the Save Wįyąbi Project, to begin mapping these disappearances using crowd-sourced data.

Lauren Chief Elk, co-founder of the Save Wįyąbi Project, and YGSNA member Tiffany Hale, a PhD student in History, led the discussion. The goal of the event was to address the silence surrounding the disproportionate levels of violence Native women face in North America, and to examine the ways in which abuse happens at interpersonal as well as institutional and state levels. Yale College senior Dinée Dorame, president of YSAN, also provided perspective on issues of sexual violence as it pertains to college campuses. Al Jazeera was present and provided news coverage of the teach-in, which corresponded with events taking place online under the hashtags #MMIW and #HowWeDisappear. Beginning at 11:00 am on 2/14, the hashtags drew participation from several different social media platforms including Twitter, Facebook, and Tumblr.

Of the many questions and insights generated, the issue of how to address issues as emotionally charged as sexual assault, murder, rape, and the silence that surrounds them loomed large. The approach, according to Chief Elk, requires attentiveness to the subtle forms of coercion that often constitute red flags in interpersonal relationships. Addressing the audience on this point she said, “Before we ever get to rape or murder, there is almost always a series of abusive behaviors where boundaries are being disregarded.”

The event concluded with an honor song by the Yale Blue Feather drum group and a prayer by Leigh Kern, a M.Div. student at Yale Divinity School.

The map can be viewed here.