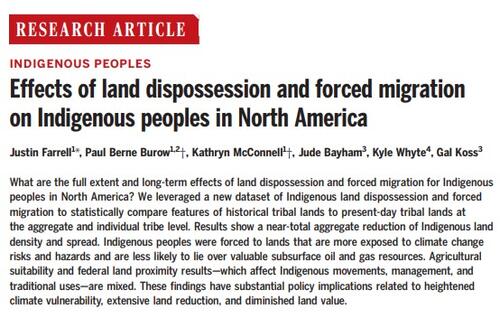 In their Fall 2021 publication in Science, a team of researchers including Paul Berne Burow, Kathryn McConnell, Jude Bayham, Kyle Whyte, and Gal Koss and led by Yale School of the Environment and Sociology Professor Justin Farrell released a research article on the effects of land dispossession and forced migration on Indigenous peoples in North America.

While prior research has identified connections between land dispossession and forced migration, much of it has been primarily qualitative or based on individual case studies. As a result, correlative and casual connections have remained difficult to identify. To broaden scientific understanding and improve potential future policymaking, researchers are now attempting to create a more comprehensive dataset of the damaging effects of dispossession and are doing so by taking a more quantitative and macroscopic approach.

In their article, the researchers compiled data from several independent sources. They validated and cross-checked, for example, crowdsourced data from Indigenous-led organizations that have offered numerous forms of invaluable information on tribal land loss. From these efforts, the team formed a dataset to compare features of historic tribal lands to present-day tribal lands.

In regard to land dispossession, the dataset revealed that 42.1% of all the tribes in the dataset had no federally or state recognized land base in the present day. For the remaining tribes, their present-day land bases are on average 2.6% the size of their historical land bases. While it varies for tribe to tribe, on the aggregate, Native nations have lost sovereignty and autonomy over an astonishingly large percentage of their former homelands.

The researchers also sought to determine whether tribes faced improved or reduced value and opportunity on their present-day lands. Focusing on tribes’ ability to participate in various economic activities, the researchers examined exposure to climate change risks and impacts, mineral value potential of lands, suitability for agriculture, and proximity to US federally managed lands, among other variables.

Additionally, the mineral value of contemporary Native lands remains less than historic lands, and while many tribes have a proportion of land with oil producing and gas-producing wells, they are hampered by distance and limited proximity to various forms of infrastructure needed for extensive extraction economies.

Other areas of research identify how agriculture and proximity to federal lands present similar challenges for contemporary tribal communities. With less bountiful lands, many contemporary reservations lack the historic bounties provided by former homelands, and the presence of often large federally controlled lands, such as national parks and forests or military lands, limit access to traditional ecologies for hunting, gathering, and fishing.

As the research paper explains, this study shows how the vulnerability of Indigenous peoples can be attributed to national polices related to land dispossession and forced migration, and it serves as a basis to mitigate the future impacts of climate change and to remediate its historical causes.