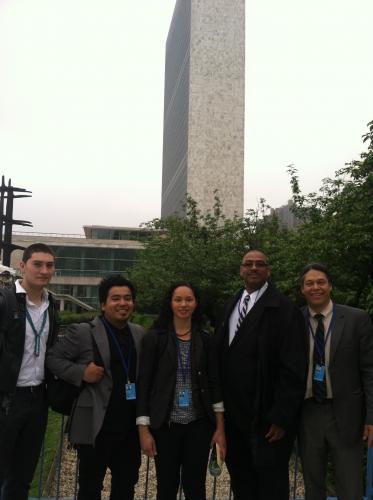 In April, YGSNA coordinators received notice of our working group’s successful proposal to be registered as a participating organization for the United Nations Permanent Forum on Indigenous Issues (UNPFII). The Thirteenth Session of the Forum began on May 12th, and five YGNSA members attended the morning and afternoon meetings of the Plenary Session held during Week 2. With delegates from UN member states, non-governmental organizations, and Indigenous communities from all six continents, the Permanent Forum attracts national representatives and concerned community members from around the globe.

Before the morning sessions, YGNSA members toured the UN Sculpture Garden (see photo) and met with Broddi Sigurğarson, Secretariat for Permanent Forum on Indigenous Issues within the UN’s Division for Social Policy and Development and its Department of Economic and Social Affairs. Mr. Sigurğarson’s office helps to coordinate the annual meetings of the UNPFII and is involved in the September 2014 UN World Conference On Indigenous Peoples: A High-Level Meeting of the United Nations General Assembly Conference. (See link below) He and YGSNA members also discussed ways in which academic institutions, like Yale, might more effectively partner with such meetings.

During the Plenary Session, Permanent Forum delegates discussed the upcoming Conference as well as a proposal to change of the name of the UNPFII to “The United Nations Permanent Forum on the Rights of Indigenous Peoples.” Presentations also drew attention to the continued exploitation of Indigenous lands and resources by multinational corporations, efforts to build more successful electoral programs to include Indigenous participation, and growing forms of violence and abuse among Asian Indigenous communities. Despite attention to such continued forms of corporate and national intrusions into the everyday lives of Indigenous community members, high degrees of political engagement, cultural pride, and optimism characterized these conversations. 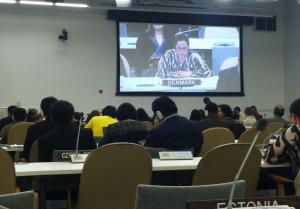 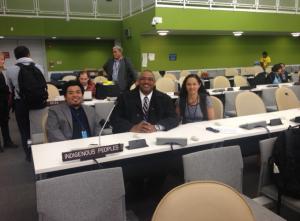