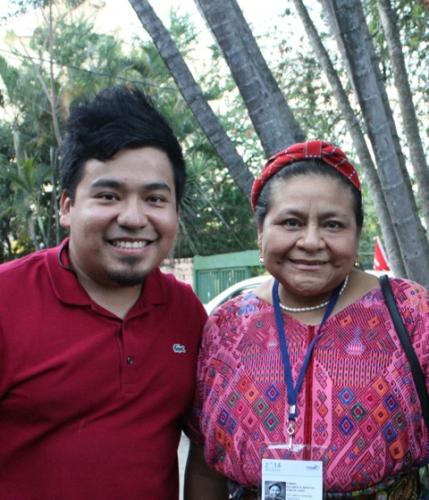 YGSNA member Jorge Cuéllar recently served as an electoral observer in the recent presidential elections in his native El Salvador on February 2, 2014. Invited by the Supreme Electoral Tribunal (TSE) and the Salvadoran government to oversee transparency and maintain the integrity of the voting process, Jorge was dispatched in San Salvador as a part of an emergency response team tasked with monitoring several voting centers in the capital city.

As part of the delegation of the National Association of Salvadoran Professionals (NASP), Jorge participated alongside other international solidarity organizations such as the Rigoberta Menchú Foundation and CISPES (Committee in Solidarity with the People of El Salvador) who were also present to oversee the exercise of citizen suffrage. An electoral contest of hemispheric importance, the Salvadoran presidential elections resulted in a run-off between the left-wing party FMLN and the right-wing ARENA to be decided in a second-round vote on March 9.

This electoral process has seen the participation of a significant percentage of the roughly 88,000 to 732,000 indigenous peoples in the country. Cultural groups such as the Náhuat-Pipil, Náhuat-Nonualco, Lenca, Ch’orti’ Maya, Kakawira, Maya-Chibcha, Xinkas, Pok’manes and Chorotegas have been visible and active in making demands on politicians during this critical moment. One of the major issues in play in this election is the legal recognition of indigenous communities by the Salvadoran government. By promoting Náhuat as a national language, encouraging the sustainable agricultural practices in these communities, as well as developing legal codes for collective land ownership through a politics of buen vivir, the FMLN government has campaigned on the promise to dignify the life and struggles of indigenous peoples in the country.

El Salvador was the site of a long civil war during the eighties amidst the polarizing climate of the Cold War. Similar to neighboring Guatemala and Nicaragua, it experienced incredible violence, primarily affecting campesinos but also leading to the further marginalization and systemic purging of indigenous peoples from national civic life.