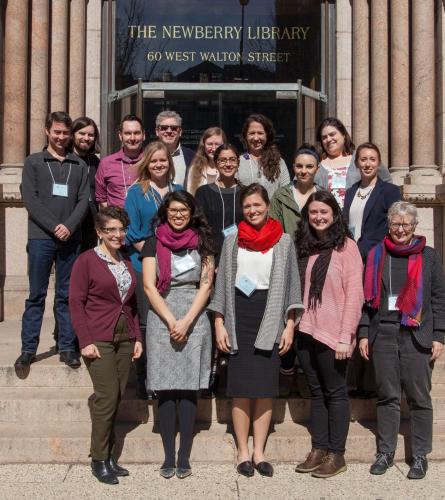 In March, YGSNA graduate student member Naomi Sussman (History) joined the Newberry Consortium in American Indian Studies (NCAIS) for a graduate student workshop entitled “The ‘Textual Continuum’: Media and Method in Native Archives.” Led by Margery Fee (University of British Columbia) and Phillip Round (University of Iowa), a diverse group of North American scholars interrogated the often presumed binary between textuality and orality, a binary which European and Euro-American writers and colonists have long believed to mark the division between white civility and indigenous savagery. The workshop brought media studies, visual analysis, and material forms of communication into the conversation, striving towards a methodology that challenges this dichotomy.

The workshop not only provided ample space for group discussion but also offered the opportunity to apply its emerging methodology to the Newberry Library’s archives. Round and Fee paired participants and assigned them objects from the Edward E. Ayer Collection, whichfeatures an unparalleled collection of North American indigenous materials. Together, wedding skills developed in the workshop with their own disciplinary training, these pairs worked to identify the objects, destabilize their place within the archive, and imagine their interpretive possibilities for future research. The workshop thus provided a new vocabulary to bridge disciplinary assumptions, methods, and approaches. 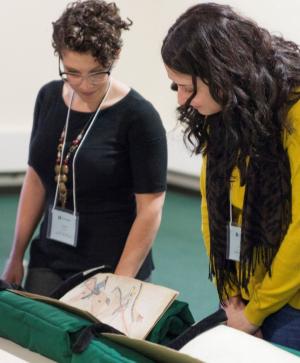 Naomi and her partner, English PhD candidate Samantha Majhor (University of Minnesota), each brought their unique backgrounds and insights to one particular object, an autograph book from Chemawa Boarding School in Oregon, one of the oldest Indian Boarding Schools in North America. “The ‘Textual Continuum’” united the expertise of historians, literary scholars, art historians, social workers, and scholars of English literature, to craft new critical methodologies in Native American Studies.

Yale has been a long-standing member of NCAIS, an inter-institutional consortium of twenty North American universities with expressed commitments to deepening Native American Studies at the Newberry Library which both runs the D’Arcy McNickle Center for American Indian and Indigenous Studies and remains one of the world’s leading repository for Native American historical, literary, and bibliographic materials. Nearly a dozen YGSNA graduate students have traveled to Chicago to attend its spring, summer, and fall programs.