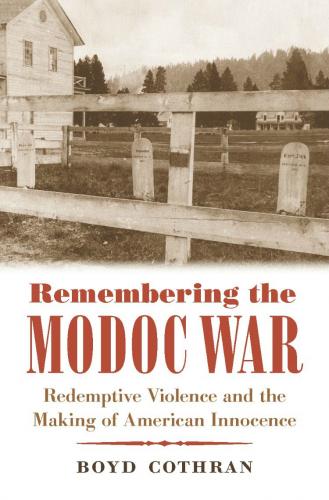 Currently Assistant Professor of History at York University in Toronto, Cothran was the inaugural recipient of the Henry Roe Cloud Dissertation Writing Fellow in American Indian and Indigenous Studies. During his year at Yale, he participated in YGSNA and completed his dissertation, “Marketplaces of Remembering: American Innocence and the Making of the Modoc War,” which served as the basis for the book.

In the interview, Cothran discussed the struggle over the meaning and memory of the Modoc War of 1872-73, one of the West’s most influential if largely under-recognized Indigenous wars. Examining representations of the conflict in the context of rapidly expanding cultural and commercial marketplaces, Cothran’s book shows how settlers created and sold narratives of the conflict that blamed the Modocs for the war that ravaged their homelands. Such stories portrayed Indigenous people as the instigators of violence and white Americans as innocent victims, a framing that still haunts projections of empire into the present. As he writes, “in the aftermath of the Modoc War, dramatic representations, novelistic adaptations, personal reminiscences, and academic and antiquarian histories of these colonial conflicts continued the violent reordering… begun by (state leaders). Encoding U.S.-Indian relations within supposedly self-evident categories such as the frontier, savagery, development, and progress, these cultural productions structured Americans’ understanding to and relationship to the past…. In the context of the Modoc War, settler colonial histories have emphasized the fundamental innocence of the American character.”

Listen to the interview here