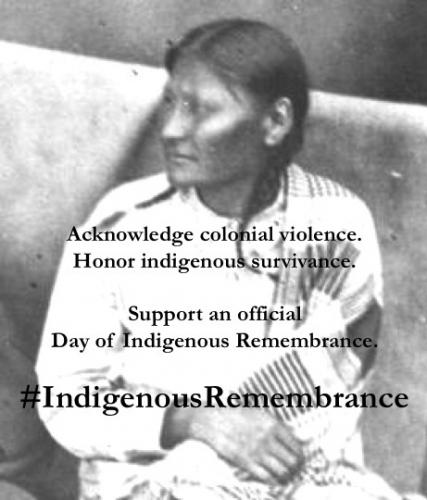 YGSNA coordinators have now formally established a social media campaign–#IndigenousRemembrance—to draw attention to long-standing patterns of violence against Native peoples and to urge state, civic, and academic institutions to recognize and commemorate the unprecedented loss of human life that European expansion brought to the Americas and to confront the enduring legacies of such violence. This campaign continues YGSNA’s year-long efforts to raise awareness of violence against Native peoples, which has included teach-ins, vigils, lectures, and the upcoming play, “Sliver of a Full Moon.”

Scholarly assessments range on the number of Indigenous lives lost due to European-introduced diseases, warfare, enslavement, massacres, and related processes of colonization. Conservative estimates suggest that the Indigenous populations of the Americas roughly totaled 75 million at the time of the Columbian Encounter, comparable to Europe’s then total population. The subsequent onslaught of European colonial conquests and settlements initiated holocausts of still undetermined proportions as North America’s Indigenous population fell to well under one million by 1900, an eighty to potentially ninety-five percent loss from its estimated 8 to 12 million total population in 1492. Indeed, early American historians have recently concluded that the entire human population of North America was less in 1776 than it was three centuries prior due to the ruptures caused by European-introduced diseases, warfare, settlement pressures, and related cultural, spiritual, and ecological traumas.

Few state, federal, or municipal governments have recognized the legacies of such violence despite the sustained efforts of Native American and First Nations activists as well as their supporters to have national holidays, such as Columbus Day, changed or abandoned.

Indigenous peoples continue to suffer violent crimes in disproportionate numbers and endure the legacies of state-sanctioned seizures of Indian lands, natural resources, cultural and religious patrimony, children, sacred lands and burials, and even genetic materials. #IndigenousRemembrance aims to draw attention to such asymmetries and to continue as well as begin efforts aimed at redressing such inequities.