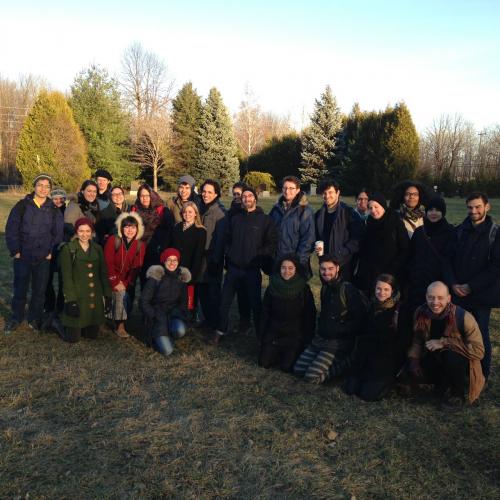 Three Yale faculty members recently joined a McGill University seminar as it visited the Kahnawake Mohawk Reserve outside of Montréal. The final class meeting of the History Department Seminar “Decolonizing North American Indigenous History,” the fieldtrip was organized by seminar instructor, Dr. Allan Downey of the Nak’azdli First Nation and an Academic Associate in Indigenous Studies at McGill. Dr. Downey works in the McGill Institute for the Study of Canada with Yale faculty member, Margaret Moss, who is on a Fulbright Fellowship at McGill this fall. They were joined by Yale History Department members, Ned Blackhawk and Marcela Echeverri Munoz as well as McGill History Department member, Catherine LeGrand.

During the visit, students learned of recent Mohawk community efforts to ‘decolonize’ their educational, religious, and linguistic programs. Introduced by Mohawk Cultural Center staff member, Tommy Deer, the class heard first-hand of the Kahnawake community’s deep and abiding commitments to cultural and linguistic preservation; to the establishment of educational autonomous programming; and to the centrality of Mohawk religious and social values in contemporary Kahnawake politics and leadership structures. Founded in the 1600s, this Mohawk community remains one of the most visible First Nations communities in Québec, and its language preservation efforts have become particularly advanced in recent years. As the number of fluent first-language Mohawk speakers has increasingly aged in the past generation, community leaders have developed new programs to combat language loss. As Deer relayed, the community has initiated year-long language Mohawk immersion programs, kids-themed television programming, and has increased the use of the Mohawk language on street signs and in public spaces, often doing so in tri-lingual ways alongside French and English.

The many First Nations and non-Native students in the course expressed deep interests in contemporary Mohawk history. After Deer’s presentation, the seminar members visited one of the reserve’s main ceremonial and political longhouses, continuing conversations initiated throughout their semester together.