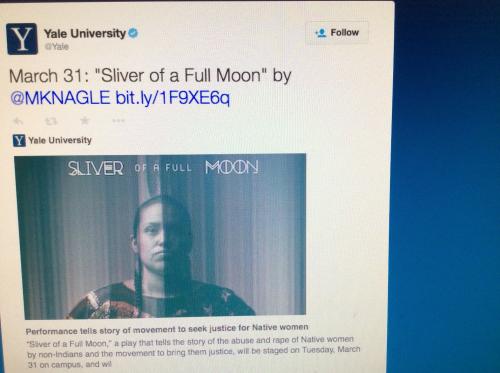 Directed by Madeline Sayet of the Mohegan Nation and written by Cherokee playwright Mary Kathryn Nagle, “Sliver of a Full Moon” tells the story of a movement that restored the authority of Indian tribes over non-Indian abusers to protect women on tribal lands. The play follows the story of five Native women who took a stand and two Native men, including Congressman Tom Cole, who stood with them to restore that authority. However, as reauthorized by Obama on March 7, 2013, Section 904 of VAWA limits the restoration of jurisdiction to “Indian country,” thereby excluding 228 federally recognized tribes in Alaska. “Sliver of a Full Moon” asks the question: What will it take to restore jurisdiction to all tribes to protect the lives of all Native women?

The cast members who testified before Congress are Diane Millich (Southern Ute), Lisa Brunner (White Earth Ojibwe), and Billie Jo Rich (Eastern Band of Cherokee). Each will be performing in the production and will be joined by a cast of Native actors from theater, film, and television. Also, for the first time in its production history, the cast also includes student actors, drawing from Yale’s Native American Cultural Center community.

YGSNA, NALSA, and the Native American Cultural Center have been actively organizing this event since YGSNA members attended a September performance of the show held in conjunction with the United Nations World Conference on Indigenous Peoples. This is the play’s first university performance as well as only scheduled showing for 2015.

To Register for the Performance and for More Information: