From Friday April 30th through Sunday, May 2nd, the 6th Annual Yale Indigenous Performing Arts Program (YIPAP) Young Native Playwrights Festival brought together hundreds of writers, actors, and audience members to celebrate Native American storytelling. Livestreamed online over three days, the festival also included an evening tribute honoring the career and legacy of Misty Upham, a member of the Blackfeet Nation and acclaimed actress. This tribute included music and remembrances from Upham’s family and friends; members of Seattle’s Red Eagle Soaring Theater Company where Misty started her theatre career; and actors from across Canada and the United States, including Order of Canada recipient Tantoo Cardinal (Cree and Métis) and Oscar-Winning Actress Meryl Streep (MFA ’75), both of whom worked with Upham.

During the festival, the 6th Annual Young Native Playwrights Contest was won by Drew Woodson (Western Shoshone) for his play “Your Friend, Jay Silverheels.” Drew is a theater and performance studies major at UC Berkeley. His play examines some of the experiences of Native actors working in the theater industry today. It was performed May 1st and was directed by Tara Moses (Seminole). 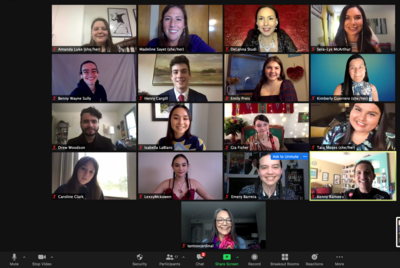 This year’s winners and finalists: