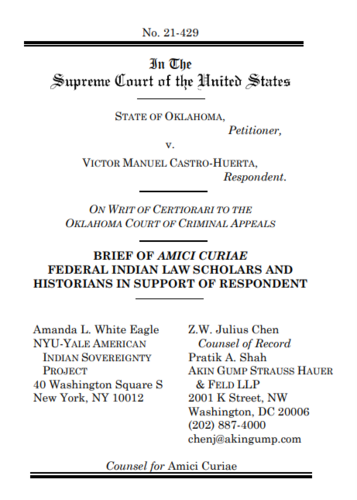 When the Supreme Court heard oral argument later in the month, it considered whether a state has authority to prosecute non-Indians who commit crimes against Indians in Indian Country. In the case, Victor Manuel Castro-Huerta, a non-Indian, challenged his Oklahoma state court conviction of child neglect committed against a Native American child within the Cherokee Reservation. Castro-Huerta, who already pleaded guilty to federal charges, argued that under McGirt v. Oklahoma, the state lacked jurisdiction over crimes committed in Indian Country without federal approval, and the Oklahoma Court of Criminal Appeals overturned his state court conviction.

Seeking to limit the scope of McGirt, Oklahoma appealed the case to the Supreme Court and argued that because Castro-Huerta is non-Indian, McGirt does not bar his prosecution by the state (McGirt involved an Indian defendant) and more broadly, that the state should retain jurisdiction over non-Indian defendants for crimes against Indians committed in Indian Country.

The authors of the amicus brief wanted to help the Supreme Court understand the historical and legal record of state jurisdiction over crimes committed by non-Indians against Indians in Indian Country. The brief surveys this two-hundred-year history and exposes the long-standing customary recognition of tribal power over non-Indians. In short, the brief argues that the federal government has exclusive jurisdiction over crimes committed by non-Indians in Indian Country. That authority remains unless Congress has affirmatively conferred or delegated such authority to the states.

As elaborated by the amici in their brief, the historical and legal record does not support the state’s argument and attempt to rewrite foundational Indian law principles, and the Supreme Court should affirm the judgment of the Oklahoma Court of Criminal Appeals that the state lacked jurisdiction over the case.