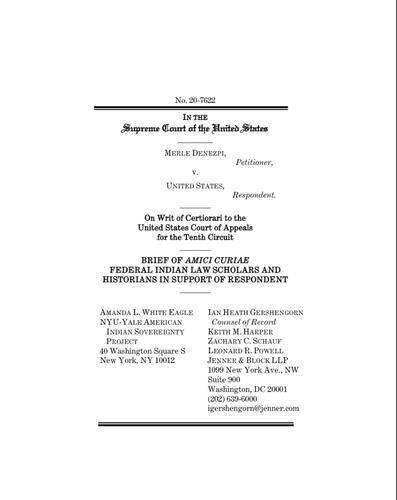 On February 22, 2022, the Supreme Court heard oral argument in Denezpi v. United States and referenced recent work done by the NYU-Yale American Indian Sovereignty Project. The issue in the case is whether the double jeopardy clause precludes the federal government’s prosecution of the defendant, Merle Denezpi, for the federal-law offense of aggravated sexual abuse when Denezpi was previously convicted of the tribal-law offense of assault and battery in the Ute Mountain Ute Tribe’s Court of Indian Offenses. Both the federal district court and the Tenth Circuit held that the double jeopardy clause did not bar Denezpi’s federal prosecution in this case.

Under the “separate sovereigns” exception to double jeopardy, a single act that violates the laws of two sovereigns comprises two distinct offenses for which the double jeopardy clause permits two prosecutions. For double jeopardy purposes, Indian tribes and the United States are distinct sovereigns because a tribe’s prosecutorial authority stems from its inherent sovereignty authority and not from a grant of federal authority. Accordingly, the central question in the case is whether the Ute Mountain Ute Court derives its prosecutorial power from the sovereign power of the tribe or the federal government.

As described in the scholar’s brief filed by the Sovereignty Project through its Native Amicus Briefing Project, the history of the courts and legal precedent support the argument that Courts of Indian Offenses derive authority from the sovereign power of tribes. Denezpi’s lawyers, however, argue that the Ute Mountain Ute’s Court of Indian Offenses derives its authority from a federal grant of power, and thus, Denezpi’s prosecution in the court barred his subsequent federal prosecution for the same incident.

During oral arguments, some questions from the Justices related to the extent of federal control over the Courts of Indian Offenses. At one point, Denezpi’s lawyer noted that the federal government appoints prosecutors to the Courts of Indian Offenses. Justice Breyer countered with mention of the scholar’s brief filed by the Sovereignty Project, which describes that a number of tribal officials were appointed by the federal government, and that prosecutors appointed to the Court of Indian Offenses were meant to be tribal officials in nature.

The scholar’s brief was the second amicus brief filed by the Sovereignty Project.  The Sovereignty Project focuses its effort and support on cases before the Supreme Court, which impact the sovereignty of Native Nations and addresses the impact of American colonialism on Native peoples. Though this case is framed around double jeopardy, a decision in favor of the defendant may open the door for the erosion of sovereignty on other issues.