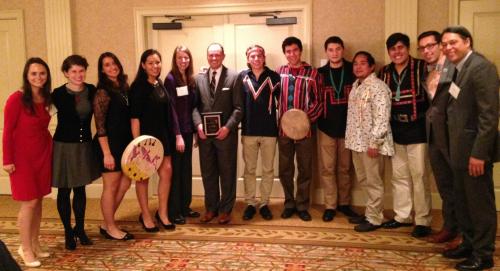 On October 23rd, Assistant Secretary for Indian Affairs Kevin Washburn returned to campus for a daylong series of events with law students, Native American Cultural Center community members, and fellow graduates of the Yale Law School. As the highest-ranking officer in the Bureau of Indian Affairs, Washburn (Law ’93), a citizen of the Chickasaw Nation, is responsible for promoting the self-determination and economic self-sufficiency of the nation’s 566 federally recognized American Indian and Alaska Native tribes and their approximately two million enrolled members. His office oversees several billion dollars in federal funding for tribal communities and works closely with other U.S. government offices involved in Indian health and human services as well as housing.

In his lunchtime presentation, “Tribal Governance in the 21st-century,” Washburn outlined the many complexities inherent to Indian law and policy and identified ways the federal government has historically mishandled Indian policy. He paid particular attention to recent movements for American Indian self-determination and examined recent laws that have authorized tribes to assume control over federal service programs, translating into extensive new powers of tribal self-governance. Such expanded powers of sovereign self-governance have restored to tribes juridical and political authority, much of which was either curbed during previous eras of federal Indian policy or disregarded by federal courts.

A packed lecture auditorium greeted Mr. Washburn. He also attended a series of Law School reunion activities including an evening banquet held for Law School affinity groups where he received the first distinguished alumni award from the Native American Law Students Association (NALSA). NALSA and YGSNA co-sponsored his lunchtime talk and worked with Native American Cultural Center students and staff to organize an afternoon meeting at the NACC. Members of the Yale Blue Feather student drum group welcomed and honored Mr. Washburn during his awards ceremony.

Prior to his appointment within the Obama Administration, Mr. Washburn held various academic positions, including Dean of the University of New Mexico School of Law. He has also served as General Counsel for the National Indian Gaming Commission, and as an Assistant United States Attorney in Albuquerque, N.M. He was a trial attorney in the Indian Resource Section of the U.S. Department of Justice and clerked for the Hon. William C. Canby, Jr., of the U.S. Court of Appeals for the Ninth Circuit.