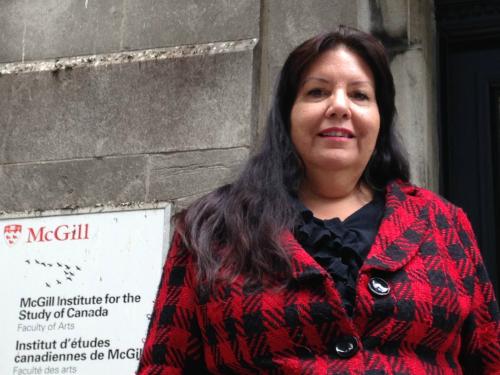 Associate Professor Margaret Moss of the Yale School of Nursing is spending the fall semester in Montréal at McGill University’s Institute for the Study of Canada, continuing her long-standing investigations into Indigenous Health and Policy Studies. Recipient of a Fulbright Fellowship, Professor Moss is investigating not only the chronic health-care disparities plaguing First Nations communities in Canada but also the Canadian government’s inability to gauge and properly identify such social inequities. As she writes in her research proposal, Counting on Care: Canada’s Challenge in Tracking and Reporting Aboriginal People’s Health Care and Status, it is “unacceptable to merely say, ‘unknown’ in 2013. Without known metrics for care, how can improvements, including closing the gap on health disparity ever move forward?”

Working on the 2nd floor of the Institute for the Study of Canada in downtown Montréal, Professor Moss will be conducting qualitative analyses of Aboriginal community members’ struggles with health care access and care, using sets of interviews and investigations of heath statues and policies to assess the application (or lack thereof) of federal heath care practices for First Nations communities. Such work is familiar for Moss. As a former Robert Wood Johnson Health Policy Fellow, she helped to staff the US Senate Special Committee on Aging during its considerations of the Disability Data Modernization Act, which recognizes the importance of definitions, health and accurate counts in developing programs nationally. As she writes about her new project, “this work needs to be done to begin to move the needle towards social and health justice and equity for North American indigenous people. Lessons learned can likely be generalized as appropriate across US/Canadian borders. It is unthinkable that in 2013, the dominant culture/governments of the PI and host country still cannot accurately count their indigenous people… The power to close health disparity gaps must first rely on who needs care, how many, where are they, what are the barriers to care, and what are the actual rates of health status indicators?”

As the only American Indian with a JD and ph.d in nursing and a member of the Three Affiliated Tribes of North Dakota, Moss is also joining McGill for the semester just as it is launching its First Nations Studies program, an initiative also housed within the Institute for the Study of Canada. While at McGill, she also plans to attend the opening of the newly renovated McGill First People’s House just a few doors away from her Peel Street office.