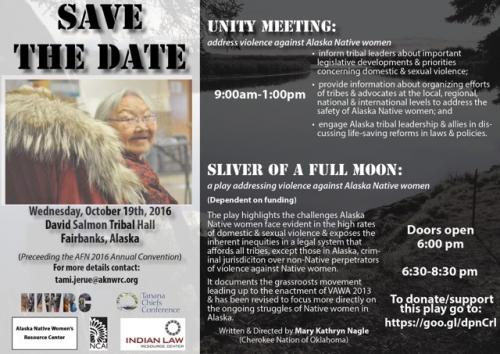 Sliver of a Full Moon— To be staged at the David Salmon Tribal Hall in Fairbanks, Alaska. Admission is free and the event is open to the public. Seating is on a first come basis, with doors opening at 6:00 p.m.

Fairbanks, Alaska — Thanks to significant funding and institutional support from the Yale Indigenous Performing Arts Program (“YIPAP”), on Wednesday, October 19, 2016, the Alaska Native Women’s Resource Center will present a reading of Sliver of a Full Moon, the powerful play by playwright Mary Kathryn Nagle, from the Cherokee Nation of Oklahoma.  Sliver of a Full Moon has been presented at theaters in New York, New Mexico, Oklahoma, and Yale Law School, as well as the United Nations, the United States Capitol, and the Smithsonian’s National Museum of the American Indian.

Sliver of a Full Moon documents the reauthorization of the Violence Against Women Act (“VAWA”) after thousands of Native women and men stood up and fought for the inherent right of American Indian Nations to protect their own citizens from domestic violence and assault inflicted on Indian lands. It is a unique play that places the stories of survivors front and center. And, for the first time, Sliver of a Full Moon will feature the stories of numerous women survivors and advocates from Alaska.

The cast of the October 19 performance will feature YIPAP’s Assistant Director, Reed Bobroff, as well as several other professional Native actors and many individual survivors who, some for the first time, will share their stories of survival on stage.

“It is an honor to be able to present this play through YIPAP,” states YIPAP’s Executive Director Mary Kathryn Nagle.  “At universities across the country, the majority of American college students have never seen a Native woman tell her story on stage.  The majority of American college students understand Native identity through movies like Disney’s Pocahontas or plays that use redface.  Creating space for Native women to represent themselves is nothing less than revolutionary and constitutes the core of the work we do through YIPAP.”

“Sliver constitutes an important part of our advocacy to restore tribal sovereignty in Alaska and ensure safety for Alaska Native women,” states Tami Truett Jerue, Executive Director of the Alaska Native Women’s Resource Center. The play highlights the challenges women face, evident in the high rates of violence and exposes the inequities in a legal system that affords all Tribes, except those in Alaska, criminal jurisdiction over certain non-Native perpetrators of violence against Native women. The play further documents the grassroots movement leading up to the enactment of VAWA 2013 and has been revised to focus on the struggles of Alaska Native Tribes and women. Sliver exposes inequalities in the law and educates audiences about the need for reform.

Congress passed VAWA 2013 in response to a clear need for major improvements in how the United States responds to violence against American Indian and Alaska Native women, especially violence committed by non-Natives. The 2013 Violence Against Women Reauthorization Act affirmed Tribes’ ability to exercise special domestic violence criminal jurisdiction (SDVCJ) over non-Indian defendants within Indian country for domestic or dating violence against Native women, and violations of protection orders.

The enactment of VAWA 2013 is critical for American Indian and Alaska Native women. “One in three Native women will be raped in her lifetime, and six in ten will be physically assaulted,” said Lucy Rain Simpson, Executive Director of the National Indigenous Women’s Resource Center, Inc.  Simpson added that, “Even worse, on some reservations, the murder rate for Native women is ten times the national average.”

As enacted in 2013, Section 904 of VAWA excludes 228 federally recognized Tribes in Alaska from exercising this newly restored criminal jurisdiction over non-Indians who commit acts of domestic violence against Native women.  “What will it take for Congress to fix Section 904 of VAWA so that it includes all Tribes in Alaska?” asks YIPAP’s Assistant Director Reed Bobroff.  “Art can be healing, and it can also encourage social change and reform.  By bringing Sliver of a Full Moon to Alaska, we hope to do both.  We hope to create a space where it is safe for survivors to come forward and break the silence, and we also seek to challenge lawmakers to ensure that Native women in Alaska are not excluded from VAWA 2018.”

Nagle added, “It’s on us to make sure all Native Nations have the jurisdiction necessary to protect their women.”

To see past press coverage of Sliver of a Full Moon and the women survivors who portray themselves in the play, please see the following: