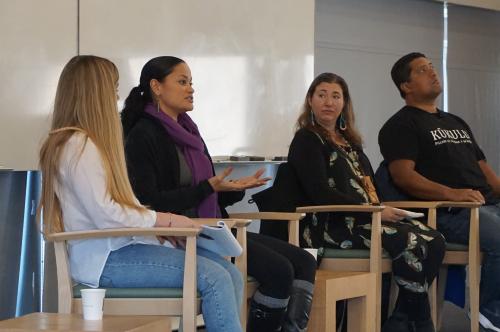 The session opened with traditional protocols and acknowledgements delivered by the three Indigenous panelists, followed by an additional land acknowledgement from the organizers of the symposium. The panelists discussed successful partnerships for Indigenous food sovereignty initiatives undertaken through community engagement.

Plunkett provided background histories for the audience concerning the actions that have led to food insecurity for Indigenous people today, particularly in Hawai’i. He discussed the work that has been carried out to engage his own community in land-use development policies on Hawai’i’s big island. Plunkett also discussed his roles in establishing the Heritage Landscape Resource Inventory Model (HLRIM) which is being used to address the food demands in the region through local initiatives. “Only 8% of food in Hawai’i is from local sources” Kamuela said adding, “we can do better than that.”

Building on Plunkett’s discussion of the socio-political underpinnings of food sovereignty,  Laronal discussed her success at integrating land-based learning at Yale. Major steps, for example, have been made towards the acknowledgement of Indigenous food knowledge systems in the establishment of the Three Sister’s Garden at the Yale Farm. The “Three Sisters” (beans, corn and squash) and other medicinal plants of the New England region are planted on a cyclical basis and harvested to feed Yale indigenous community members and their guests. This project has been important for many Indigenous students who have approached this community collaboration from varying perspectives and experiences.

Connecting foodways with educational institutions, Rachel Sayet discussed the initiatives that the Mohegan have developed, including a greenhouse and garden as part of the Mohegan Tantaquidgeon Museum. She spoke about the numerous partnerships developed in the region that have contributed to the expansion of these gardens and of their  importance to contemporary Mohegan tribal citizens. In addition to the local food revitalization efforts, Sayet acknowledged the links between place names of the land and the attempts to reconstruct the Mohegan language. Place, land and language are linked, and using traditional food systems for the Mohegan people has generated increased attention to Mohegan place-names and language usage.

Tying together the session’s themes about finding equity in Indigenous systems of knowing with sustainable food practices, Laronal referenced Hawai’ian star-lines, which determine the timing for subsistence fishing practices on the islands. She recognized the potential for successful collaboration between traditional systems and advanced technologies, and Kamuela ended the panel discussion with a call to “protect hope.” As he emphasized, it is important to see indigenous land-use practices as legitimate knowledge systems in land use planning today.

After the panel, many of the audience members asked about ways to get involved with Yale’s Three Sisters garden while others were interested in hearing more details about the politics of land use planning in Hawai’i. Needless to say, there is growing interest in the food sovereignty initiatives of Indigenous communities, especially in light of their potential to serve as a model for the food systems of society at large.