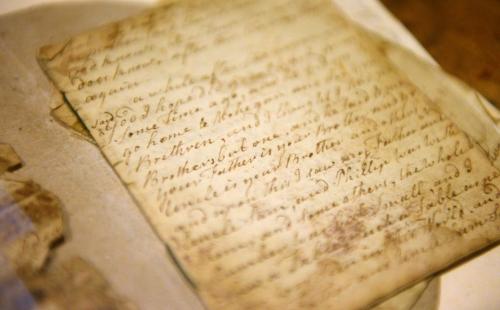 In mid-November, YGSNA members and Yale Indian Papers Project editors Paul Grant-Costa and Tobias Glaza met with the Mohegan Elders Council and other tribal representatives to share a remarkable discovery: a deathbed conversation between a Mohegan woman and her mother penned in 1776 by the famed minister Samson Occom (1723-1792). Occom is widely recognized as the first North American Indian leader to publish in the English language and worked extensively to create educational, religious, and intellectual space for Native peoples coping with the pressures of Anglo colonialism. This previously unpublished record includes, additionally, the personal margin notes written by another Mohegan cultural leader, Fidelia Smith Fielding (1827-1908), the last known speaker of the Mohegan-Pequot language.

Grant-Costa and Glaza recently identified the small seven-page manuscript notebook as being from both Occom and Fielding, doing so based on these researchers’ familiarity with the handwriting. They used additional clues from within in the document to authenticate its authorship and have added it to their growing corpus of archival materials acquired and made available through the Yale Indian Papers Project.

This discovery is significant in several ways. While there is a rather large collection of Occom material at the New London County Historical Society, the Connecticut Historical Society, and at Dartmouth College, this 1776 notebook comes from a different time, the early Revolutionary period, in which, according to former Mohegan archivist, Faith Damon Davison, there is a gap in the existing Occom journals. As for Fielding’s comments, Mohegan historian Melissa Tantaquidgeon Zobel believes that the document represents the earliest surviving example of Fielding’s writing, since most of it was burned in a house fire in the early 20th century.

The document also includes the important identification of the wife and daughter of Robert Ashbow, an 18th century tribal leader, and his brother and nephew, Samuel Ashbow, Sr. (1718-1795) (http://yipp.yale.edu/bio/bibliography/ashbow-samuel-sr) and Samuel Ashbow, Jr. (1748-1775). Such information provided members of the Mohegan Elders Council insight into an important Mohegan family, some of whose ancestors were present at the meeting. It appears that Occom wrote the account when Robert and Samuel, Sr. were away from the Norwich community, most likely preaching or speaking with Native people in New York. During that time, Robert’s daughter returned from being absent and had come home to Mohegan, only to get ill and die.

Out of respect to his kinsmen (Samuel Ashbow being one of Occom’s spiritual and political mentors), the minister captured the dying woman’s last moments, including a profession of faith. He did so to share with the Ashbow brothers on their return. Mentioned, too, is the dying woman’s cousin, Samuel Ashbow, Jr., the first known Native casualty of the American Revolution, who was killed the year before at Breed’s Hill during the Battle of Bunker Hill as well as his previously unidentified wife, Jerusha. Such personal and familial insights are rare for the eighteenth-century history of Native New England.

Just three months before the meeting with the Yale editors, several Mohegans, including tribal veterans, had commemorated the young Ashbow at the tribe’s annual wigwam festival with an unveiling of a drawing of him: (http://blog.nmai.si.edu/main/2014/11/meet-native-america-kevin-p-brown.html; http://www.theresident.com/celebrating-the-camaraderie-between-the-mohegan-tribe-and-american-colonists/).

Working with tribal communities is an essential component of the Yale Indian Papers Project’s mission. “One goal of the project is getting the record out; another is starting a conversation where everyone is welcome to the table,” said Grant-Costa. “That’s what scholarship should be. Yale is a humanities-based institution, and this is a humanities research project, with a strong social justice component designed to give voice to a marginalized history. It is also very important to bring Native scholars into the discussion,” said Grant-Costa. “Yale is connected with Indian people in New England very deeply. The university’s history shows that many Yale graduates interacted with the region’s Native communities, as missionaries, teachers, overseers, governmental agents, or as inquisitive historians or anthropologists, — including Abraham Pierson, the first rector of Yale, other presidents, Ezra Stiles and Timothy Dwight, and more modern scholars like the Peabody Museum’s Froelich Rainey and Ben Rouse. This project, in some ways, aims to re-establish the Yale legacy of working with local Native people.”