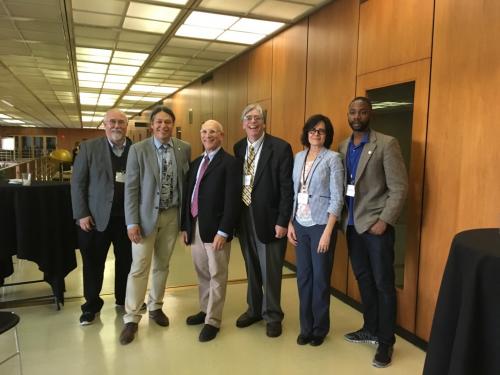 Sponsored by the Association of Yale Alumni, the Yale Alumni Association of Michigan, and Wayne State University, this symposium provided extended inquiry into the social, racial, and political formation of this urban environment, examining the city’s history before, during, and after its 1701 settlement. Founded in the same year as Yale University, Detroit’s Indigenous and imperial history is often neglected in broader histories of this metropolitan area.

Karen Marrero’s presentation, “Angelique’s World: Marriage, Family and Regime Change in Old Detroit,’ drew particular attention to the centrality of Indigenous social relations in the emerging Francophone settlement world of the 1700s. Examining the ways that marriage between French leaders and Indigenous women linked imperial politics to the village world of resident Algonquian-speaking native peoples, her presentation highlighted the gendered relations of empire in this portion of New France. Marrero concluded her presentation with sets of representational forms that emerged after the fall of New France, assessing the new forms of domestic and gendered visions of empire that the British and then the United States brought to the region. These varying gendered practices worked to undermine and erase the autonomous forms of authority that Native women had achieved under the French.

Ned Blackhawk’s presentation, “Circa 1701: Detroit in Greater Native North America,” drew upon existing studies of the Great Lakes and Iroquois Confederacy to lodge the eighteenth-century history of Detroit in the larger imperial and “play-off system” that formed in the aftermath of the Great Peace, or Grand Settlement, of 1701. Held in July 1701 in Montreal, this momentous peace accord both curbed Francophone-Iroquoian hostilities and led to the mutually agreed upon recognition of Detroit as a demarcation boundary between French, allied Algonquian communities, and the Iroquois Confederacy. Tying both Detroit’s founding, then, to the multilateral politics of empire in the early 1700s, Blackhawk also examined the place of Detroit in the larger Anglophone-Francophone conflicts emerging across the Ohio River world in the 1750s, conflicts that led to the outbreak of the Seven Year’s War in 1753/54.