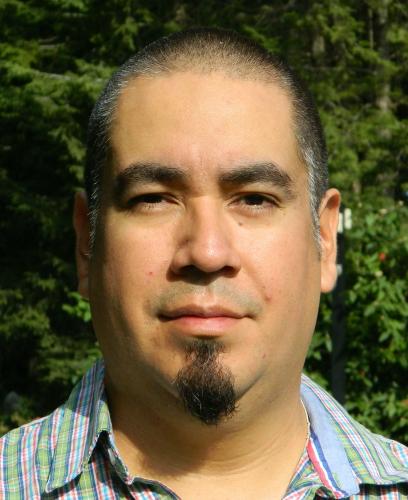 The Yale Group for the Study of Native America (YGSNA) is pleased to welcome Cliff Atleo, Jr. (Kam’ayaam/Chachim’multhnii) to campus. A member of the Nuu-chah-nulth and Tsimshian Nations of British Columbia, Cliff is the 5th Henry Roe Cloud Dissertation Writing Fellow in American Indian and Indigenous Studies, Yale’s annual dissertation fellowship for graduate students in the field of American Indian and Indigenous Studies.

A doctoral candidate in Political Science at the University of Alberta, Cliff’s work is a theoretical and practical engagement with “Aboriginal capitalism,” a model of tribal economic development that seeks to reconcile mainstream capitalism with indigenous interests and culture. Aboriginal capitalism has emerged as a predominant model for indigenous development since the latter decades of the twentieth century, perhaps most prominently in joint natural resource development ventures. Cliff’s project, grounded in his longstanding work in Nuu-chah-nulth territory, advances a deep critique of this model and explores the viability of alternative economic practices rooted in Nuu-chah-nulth principles.

Cliff’s project builds on his masters’ research, which traced the decline of traditional Nuu-chah-nulth economic practices. Cliff’s dissertation presents case studies from Nuu-chah-nulth territory that describe the impact of Aboriginal capitalism upon indigenous ways of life as well as assess how families returning to the land develop modes of life that honor traditional economic and social principles. Such practices, he suggests, provide the possibility of sustainable indigenous economic alternatives in the twenty-first century.

Alongside scholars like Glen Coulthard and Leanne Simpson, Cliff insists upon both the possibility and the necessity of contesting the circumscription of indigenous life by dominant forms of settler political economy. He describes his work not as a new indigenous essentialism, but rather as an attempt to give voice to alternatives to dominant settler colonial practices, alternatives that take seriously the active and relational dimensions of indigenous life.

Cliff will be in residence at Yale through the 2014-15 year and will present material from his dissertation-in-progress at YGSNA in Spring 2015. He has recently published a review of Glen Coulthard’s Red Skin, White Masks: Rejecting the Colonial Politics of Recognition in the journal Decolonization: Indigeneity, Education & Society. His work has previously appeared in For Indigenous Minds Only: A Decolonization Handbook (SAR Press, 2012).