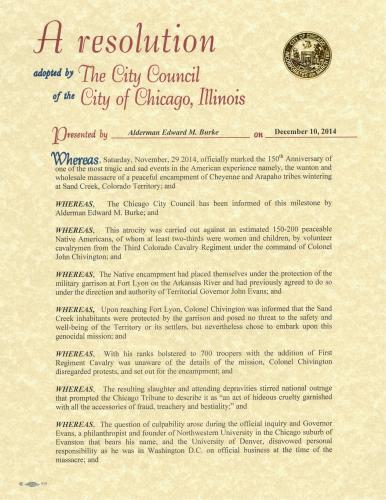 In December, the City Council of the City of Chicago adopted a resolution in order “to honor the memory of the victims of the Sand Creek Massacre.” Presented by Alderman by Edward M. Burke, affixed with the seal of the city, and signed by Chicago Mayor Rahm Emanuel, the resolution was presented to the Colorado Sand Creek Massacre Commemoration Commission, the Board of Trustees at the University of Denver, and the Board of Trustees of Northwestern University. It resolved: “That we, the Mayor and the members of the Chicago City Council… do hereby reflect upon that day of sorrow and extend our deepest regrets and sympathies to the descendants of the men, women, and children slain at Sand Creek.”

This resolution followed the 150th anniversary of the Sand Creek Massacre of November 29, 1864, as well as a series of institutional inquiries established by the State of Colorado, Denver University, and Northwestern University. Colorado Territorial Governor John Evans was governor at the time of the massacre and had authorized the formation of civilian auxiliaries to join U.S. cavalry units the summer before the tragedy. His legacy became the subject of deep campus concern at both Denver U. and Northwestern, institutions that he had founded or co-founded. Northwestern is located in Evanston, Illinois, and it maintains prominent Evans commemorations across campus, on its faculty, and within its alumni facilities. 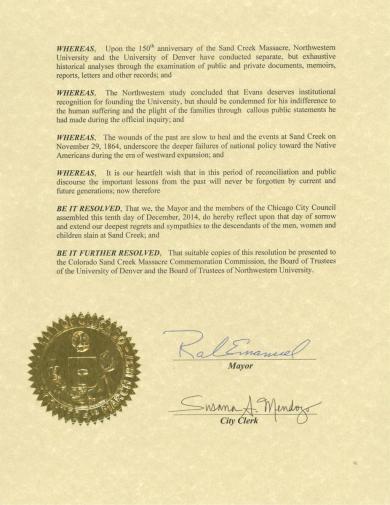 While Evans’ ultimate role in this massacre of non-combatants remains debated, Colonel John Chivington’s does not. Chivington led the attack at Sand Creek and disregarded his own officers’ and setters’ insistences that the encampment was indeed comprised largely of women, children, and the elderly. He also authorized the use of wanton violence and mutilation, allowing his soldiers and militia members to collect and display gruesome body parts from the massacre. For such actions, his legacy, according to the resolution, remains “genocidal”:

“Whereas, Upon reaching Fort Lyon, Colonel Chivington was informed that the Sand Creek inhabitants were protected by the garrison and posed no threat to the safety and well-being of the Territory or its settlers, but nevertheless chose to embark upon this genocidal mission….”

The resolution also expresses the “heartfelt wish that in this period of reconciliation and public discourse the important lessons of the past will never be forgotten.”