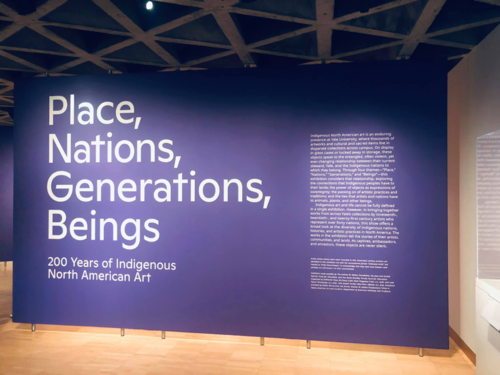 When visiting the exhibition, Boston Globe reporter Murray Whyte was struck by its distinctive, broad, and ethically-minded curatorial methods. Having worked previously in Canada in coverage of cultural affairs and Indigenous arts, Whyte sensed the exhibition’s awareness of other Indigenous-centered curatorial efforts occurring across North American museums. As he writes, “The curators describe the works here as ‘emissaries’—still belonging to the various nations whose members created them, resting here as emblems of colonial violence and the resilient people who made them.”

Themes of violence and curatorial redress resonate throughout his extended review of the YUAG exhibition. From contemporary photography to nineteenth-century weavings, from boarding school drawings to late twentieth-century ceramics, this show marks, as Yale University Art Gallery Director Stephanie Wiles has written, a “milestone in the display and interpretative of Native American art at Yale.”

The exhibition will be on display at the Yale University Art Gallery until June 21, 2020.