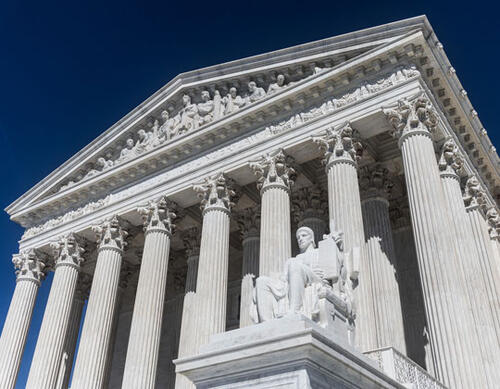 On January 18, the NYU-Yale American Indian Sovereignty Project submitted an amicus brief in Denezpi v. United States. Members of the project, including students from NYU, Yale, and Stanford, worked closely with federal Indian law scholars and historians, the Native American Rights Fund, and Jenner & Block LLP to file this brief.

On Feb. 22, the Supreme Court will hear oral argument in Denezpi v. United States, a double jeopardy case presenting the question whether the federal government can prosecute a Navajo citizen, Merle Denezpi, for the federal-law offense of aggravated sexual abuse after he was already prosecuted for the same incident in the Ute Mountain Ute Tribe’s Court of Indian Offenses, where he was convicted of the tribal-law offense of assault and battery.

For rights advocates familiar with the U.S. criminal legal system, the first impulse may likely be sympathy for the petitioner’s double jeopardy argument. So why have rights-supporting amici, including the National Indigenous Women’s Resource Center and National Congress of American Indians, filed briefs in support of the United States, arguing that double jeopardy does not preclude federal prosecution?

The answer: dual sovereignty. Accepting the petitioner’s argument would require the Court to ignore Native sovereignty. As the scholars’ brief outlines, the Ute Mountain courts – although originally conceived of as assimilationist, colonial institutions – derive their authority not from federal power but from the sovereign power of the tribes. Applying double jeopardy would require the Supreme Court to hold that tribal and federal courts derived their authority from the same source – undermining Native sovereignty and furthering American colonialism, this time in the name of individual rights.

The Supreme Court has recognized that a single act violating two sovereigns’ laws comprises two distinct offenses for which the Constitution’s Double Jeopardy Clause permits two prosecutions. The Court has also recognized that, for the purpose of double jeopardy, Indian tribes and the United States are distinct sovereigns, because tribes’ authority to prosecute and punish conduct stems from inherent sovereignty and not a grant of federal authority. Applying that precedent, both the federal district court and the Tenth Circuit held that the Double Jeopardy Clause did not bar federal prosecution in this case.

Denezpi’s brief, however, equates his prosecution in the Court of Indian Offenses, commonly known as a C.F.R. Court, with his prosecution in federal district court, arguing that the Ute Mountain Ute Court of Indian Offenses derives its authority from federal power, not the tribe’s inherent sovereignty. Accordingly, the case turns on the ultimate source of the prosecutorial power of the C.F.R. Courts.

With the expansion of the United States in the late nineteenth century, the focus of federal Indian policy was assimilation. To further this policy, the federal government started using aggressive and intrusive tactics, including confining Native peoples to reservations supervised by federal Indian agents. Although the agents reported to the Commissioner of Indian Affairs, in practice, there were few limits on their authority. One limit, however, came from ways that Native people were resistant to the destruction of their way of life.

In response to this resistance, agents began to manipulate tribal institutions in hopes of more effectively forcing assimilation. At this time, many tribes had their own tribal courts and police, but in the communities that lacked these institutions, Indian agents saw an opportunity. Agents experimented with creating tribal police and courts staffed by tribal members who would further federal objectives, resulting in the Courts of Indian Offenses. Notably, the Office of Indian Affairs did not establish courts for tribes with their own established court systems.

Courts of Indian Offenses were created by the Office of Indian Affairs under the authority of the Secretary of Interior. The governing regulations issued by the Secretary made many aspects of Native peoples’ way of life punishable in the new courts. Polygamy, religious ceremonies, and other “heathenish rites and customs,” were all punishable offenses under the regulations. Courts of Indian Offenses ultimately failed to live up to the expectations of Indian agents. The courts were controlled by Native people, who found opportunities for leeway under the regulations. Native judges rarely punished community members for cultural practices, as the Indian agents had intended when creating the courts. Instead, the judges made decisions based on tribal law and customs through informal adjudications, often carried out in Indigenous languages.

Release of a 1928 federal report on the state of Indian affairs, known as the Meriam Report – which, among other things, documented gross abuses of authority by federal Indian agents – contributed to another shift in federal Indian policy. Under the new policy, known as the Indian New Deal, the federal government pivoted from assimilationist goals to goals more closely related to the restoration of tribal self-governance, and in 1934, Congress passed legislation encouraging tribes to adopt constitutions and enact their own legislation.

Courts of Indian Offenses were also impacted by this shift in federal policy. New regulations abandoned earlier efforts to punish practices of Native cultures. Tribes could enact their own criminal laws that would replace nearly all federal regulations, and the tribal council’s approval was required for the appointment of judges and establishment of rules of court procedures. The Courts of Indian Offenses were also renamed C.F.R. Courts, a shift away from the original colonial nomenclature.

Under the new regulations, most tribes eventually shifted away from C.F.R. Courts and toward wholly independent tribal courts. Not every tribe, however, has had the resources to create tribal courts independent of the C.F.R. Court infrastructure, and today, five C.F.R. Courts continue to serve fifteen tribes, enforcing tribal law with federal administrative and financial support.

Despite the transformation of the federal policy behind C.F.R. Courts, a careful look at the history shows even the early Courts of Indian Offenses, although manipulated to enact assimilationist aims, exercised prosecutorial power derived from tribal sovereignty. From their creation, C.F.R. Courts exercised criminal jurisdiction over crimes committed by Indians against Indians. Seeking to reshape Native nations and cultures, the nineteenth century Office of Indian Affairs wanted federal jurisdiction over crimes involving solely Indians. But federal law at the time, which Congress had refused to change, excluded such jurisdiction. The Office of Indian Affairs found a way around federal law, creating Courts of Indian Offenses and seizing tribal prosecutorial power to make practices of Native culture punishable. Indeed, the reports of the Indian Agents and the Commissioner of Indian Affairs reflected the understanding that the Courts of Indian Offenses only had jurisdiction over Indian-on-Indian crimes because they exercised tribal authority.

Still, the Office of Indian Affairs continued to seek federal jurisdiction over Indian-on-Indian Crimes. These efforts were continually thwarted. In Ex Parte Crow Dog, for example, the Supreme Court confirmed that the federal government lacked jurisdiction over crimes involving solely Indians—unless and until Congress affirmatively passed a statute recognizing that jurisdiction. After the ruling, Courts of Indian Offenses continued to operate – and, with federal jurisdiction now expressly precluded by Supreme Court precedent, must have been doing so under the sovereign prosecutorial power of the tribes.

In the late nineteenth century, with the boundaries of administrative authority not clearly defined, the Office of Indian Affairs had concerns about its authority to create the Courts of Indian Offenses. To the extent that federal officials believed that they had the power to create the C.F.R. Courts, along with much of the detention camp infrastructure of the so-called “reservation era”—including boarding schools.  This belief was rooted on the late nineteenth century view that the federal government had unchecked authority over the Indians simply because they were “uncivilized.” This antiquated view, however, is not consistent with modern notions of separation of powers and is wholly out of step with the constitutional values of today.

Since the Indian New Deal, the federal government has explicitly recognized that Courts of Indian Offenses and their successor C.F.R. Courts are tribal courts exercising sovereign authority. In the 1930s, the Solicitor of the Department of the Interior, Nathan Margold, wrote influential memos, which became the basis for Felix Cohen’s Handbook of Federal Indian Law. Both Cohen and Margold concluded that the courts exercised tribal, not federal, authority. As quoted in the scholars’ amicus brief, one of Margold’s memos stated that a “more satisfactory defense of [the courts’] legality” than the one offered by the Clapox court is that Courts of Indian Offenses “derive their authority from the tribe, rather than Washington.” Another memo described the courts as “manifestations of the inherent power of the tribes to govern their own members.” Cohen also specifically addressed the question of double jeopardy, concluding that dual prosecution would be constitutionally permissible, as federal courts and tribal courts derive their power from different sources – a view that Congress and the Supreme Court have affirmed.

The Courts of Indian Offenses were created as a colonial, assimilationist project, intended to twist the power of the tribe back against Native communities. That effort largely failed, thanks to the resistance of the Native people who occupied positions within tribal courts. Holding that the successor C.F.R. Courts exercise delegated federal authority would be a step backwards to further entrench American colonialism, undermining tribes’ exercise of sovereign authority in the name of “individual rights,” much like late nineteenth century assimilation efforts were justified in the name of “civilization.”  As the scholars’ brief argues, to accept the double jeopardy argument would be “to freeze federal Indian policy at its assimilationist apex.”

Holding that C.F.R. Courts’ ultimate source of authority stems from the federal government as a means to protect individual rights secured by the United States Constitution also opens the door for the erosion of sovereignty in other cases, on other issues. A petition for certiorari is currently before the Supreme Court in Brackeen v. Haaland, a case challenging the constitutionality of the Indian Child Welfare Act (ICWA). ICWA, passed in 1978 in response to alarming rates of removal of Indian children from their homes and communities, plays a crucial role in protecting Native children from efforts by the United States to take potential tribal citizens away from Indian Country as a means of undermining tribal sovereignty. There are no sovereigns without citizens. ICWA also a frequent target for attacks on the sovereignty of Native nations – which, as I previously wrote about in connection with Penobscot v. Frey – is increasingly at risk in the courts.

The assimilationist project failed once before. But in Denezpi and other cases challenging Native sovereignty, modern-day proponents seek to revive it under the guise of concerns over individual rights. This particular case is framed around double jeopardy, but that should not be allowed to obscure its deeper purpose: as part of a long line of efforts to chip away at the sovereignty of Native nations.