Ali Cobby Eckermann Returns March 21st with Too Afraid to Cry: Memoir of a Stolen Childhood 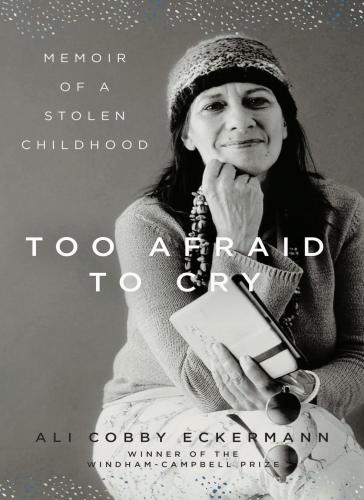 Ali Cobby Eckermann Returns March 21st with Too Afraid to Cry: Memoir of a Stolen Childhood

On Wednesday, March 21st at 5pm at the Peabody Museum, Ali Cobby Eckermann (Yankunytjatjara) will return to Yale to share her just released memoir, Too Afraid to Cry (W.W. Norton, 2018). A harrowing narrative of injustice, resilience, and family, Eckermann’s book chronicles two generations of Aboriginal struggles for justice and traces the personal and familial injuries instituted by the Australian government’s forced assimilation programs.

As in North America, Indigenous children in Australia were forcibly taken from their communities but were sent largely to non-Aboriginal, settler families, often living years without contact with parents, siblings, and communities. Between 1910 and 1970, nearly 100,000 Indigenous children in Australia were raised by strangers. The emotional toll inflicted by such assimilative programs is immeasurable, and scholars increasingly view such forced child removal programs as “cultural genocide.” Only in recent years has the Australian state begun to apologize for its role in fostering such “stolen generations.”

In Too Afraid to Cry, Eckermann shares her own story of heartbreak and reunion. In chapters alternating between poetry and unfettered prose, Eckermann recounts her early years growing up with her adoptive family in Hart, South Australia. Taken from her mother at birth (who was, in turn, taken from her mother at birth), Eckermann recalls traveling through childhood largely unaware of the fate she shared with her adopted siblings: each of them seized from their Indigenous families and redistributed among white families in a government policy of forceful assimilation.

As an adult, Eckermann sought out her biological mother. She describes the process of cultural resiliency and acceptance that increasingly tied her to her traditional family. As she relays, poetry became for her a particularly useful space of communication in developing and maintaining such connections.

Eckermann has made a career of revealing such neglected histories. Her first collection of poems, Little Bit Long Time, appeared in 2009 in New Poets Series of the Australian Poetry Centre and was followed by prize-winning works thereafter, including the 2015 collection Inside My Mother, which Eckermann describes as an “emotional timeline” of the Stolen Generations. In addition to her work as a writer, Eckermann is also the founder of Australia’s ﬁrst Aboriginal writers retreat.

Last September, Eckermann came to Yale to accept the 2017 Windham-Campbell Literary Prize in poetry, one of the world’s largest literary prizes. She arrived in New Haven from Australia accompanied by her children, Audrey and Jonnie, and spent a week on campus with many YGSNA members, including Dean Kelly Fayard and NACC Associate Director Kapiolani Laronal who organized a welcome dinner for Ali and her family at the NACC.

NACC Members Katie McCleary and Natalie Ball also attended the Windham-Campbell Prize dinner and participated in the panel at the Yale Center for British Art, “Never a Solo Voice: Community, Indigeneity, and Art-Making.” They were joined by Ali and Professor Adrienne Keene from Brown University.

Copies of her book will be available for purchase at the Peabody.