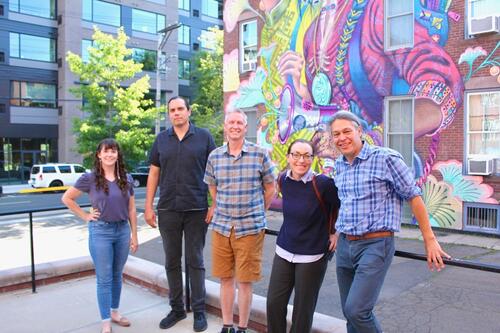 On September 1, the NYU-Yale American Indian Sovereignty Projected concluded its first year. Over the past twelve months, nearly one hundred students, faculty, and staff at NYU and Yale, as well as Stanford, Harvard, Northwestern, and other universities, have participated in a variety of Project undertakings, ranging from legal advocacy, scholarly research, and collaborative inter-institutional initiatives.

Such work has exposed forty-eight law and/or professional students to the field of federal Indian law and particularly the legal challenges that contemporary Native nations and their allies face within the U.S. court system. It has also highlighted a range of possibilities that coordinated research, advocacy, and training can play in confronting these challenges. As co-directors, Ned Blackhawk and Maggie Blackhawk have recently suggested in the Project’s Annual Report, “it has been a busy year, one filled with unanticipated achievements, new collaborations, and well over one hundred pages of briefs filed on behalf of tribal nations.”

Initially conceived to bring together the resources and capabilities of two institutions—NYU Law School and Yale University Faculty of Arts and Sciences (FAS)—the Project spent much of its first months hiring a dedicated team—a researcher, administrator, and fellow—who have worked to build the Project’s infrastructure and organizational capacity. Based out of New Haven and New York City, the Project maintains a memorandum of understanding between each campus’s respective provosts’ offices.

With already established partnerships with the Native American Rights Fund (NARF) and National Congress of American Indians (NCAI), the Project’s clinical component—the Native Amicus Briefing Project—moved quickly, taking on 4 U.S. Supreme Court briefs in under eight months. Penobscot Nation v. Frey, Denezpi v. United States, Oklahoma v. Castro-Huerta, and Brackeen v. Haaland. A joint undertaking between students, faculty, and staff, each brief was drafted, edited, and finally submitted to the Court in partnership with NCAI and NARF, and with its law firm partners. Jenner & Block, Deutsch Hunt PPLC, and Akin Gump. Getting these briefs researched, drafted, and submitted before the Court has been a primary Sovereignty Project priority, and many students, faculty, and staff involved found the work generative and satisfying, particularly when several briefs influenced court arguments and opinions. In Denezpi v. U.S., for example, Justice Breyer referenced the Project’s brief in the case during Oral Arguments.

The Sovereignty Project has also worked to build support for a variety of Indian legal efforts as well as scholarly infrastructure, including the “Tribal Constitutions Project,” that Sovereignty Project members are conducting with scholars at Northwestern University. Additionally, the Project coordinated and hosted the Institute for Constitutional Studies (ICS) 2022 Summer Institute in New Haven. Nearly twenty students and scholars of federal Indian law participated in a one-week seminar on “Native Peoples, American Colonialism, and the U.S. Constitution.” The ICS is the nation’s leading institute dedicated to ensuring that future generations understand the historical development of the U.S. Constitution and is in its third decade of hosting annual summer programs across North America. This year’s theme was the first time the Institute focused on Indian law and policy.

Many other developments have followed, including the implementation of new methodologies for tracking Indian law cases within the federal court system; workshops, presentations, and guest speakers at NYU and Yale; supporting existing partnerships with tribal communities; and convening scholarly meetings for anticipated publications. In June, journalist Rebecca Nagle and historians Philip Deloria and Nick Estes participated in a multi-day essay workshop with Project leaders. Bringing together field leaders to discuss ways of advancing the study of Native America is another key feature of the Project.