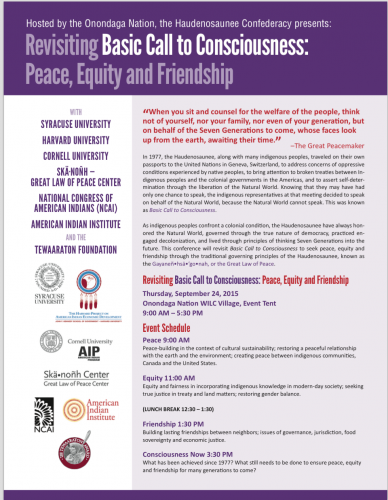 On September 24, the Onondaga Nation hosted a day-long symposium revisiting the “Basic Call to Consciousness,” a 1977 address made by leaders of the Haudenosaunee Confederacy (commonly known as the Iroquois) at the United Nations in Geneva, Switzerland, advocating for Indigenous self-determination and an end to the destruction of the natural world. The event was organized in conjunction with the 2015 World Indoor Lacrosse Championship, the first major international sporting event held on recognized Indigenous land.

Panels centered on he themes of peace, equity, friendship, and “consciousness now” and included presentations from Oren Lyons, Faithkeeper of the Onondaga Nation, Haudenosaunee clan mothers, lacrosse players, academics and non-Native activists working in solidarity with the Confederacy. YGSNA member and Yale history graduate student Andrew Bard Epstein presented his research on the Everett Report, a long-suppressed government commission from the 1920s which found that most of western New York had been illegally seized from Haudenosaunee nations and advocated its return.