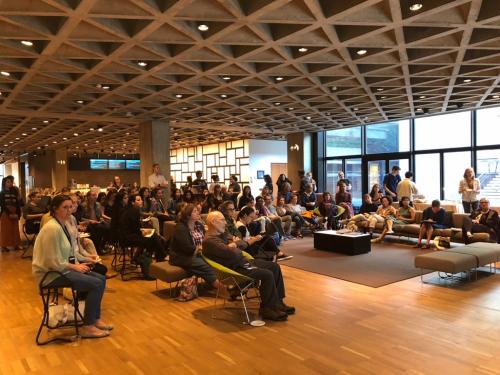 Nearly a hundred staff, faculty, patrons, students, and community members gathered in the gallery’s open entry hall to hear the presentation and to ask questions from the Yale student-curators, Katherine McCleary, (’18), Leah Shrestinian, (’19), and Joseph Zordan, (’19). The student group has been working on the preparation of the exhibit since the Fall of 2017 and has traveled widely across North America to evaluate the successful curatorial, exhibition, and tribal collaborative practices currently utilized by leading tribal, national, provincial, and academic museums engaging the vibrant field of Native arts.

Zordan introduced the exhibition as a series of firsts. Not only is it “the biggest collaboration,” he relayed, between respective campus museums and libraries, but it is also “the first exhibition on Native North American Art” at YUAG. The students then introduced the first object that will be on display in the exhibit—a wood and wampum inlayed bowl carved in 2017 by Mohegan craftsman, Justin Scott. The bowl was given to Yale University at a signing ceremony and agreement between the Mohegan Tribal Council and the President’s Office in November 2017. At this historic agreement, Yale’s Peabody Museum agreed to return over one hundred Mohegan objects to the Mohegan Tribe of Connecticut. Additionally, to honor of the ongoing relationship between Yale and the Mohegan, all labels in the exhibit will be displayed in the Mohegan language. Such collaboration and recognition are guiding themes for the exhibit.

The presentation was followed by conversations that discussed best practices in curating Native North American Art. The student-curators believe that the re-contextualization and re-organization of museum objects (as well as the implementation of a Native Art Advisory group) can help to lessen the damaging impacts from ill-advised methods of displaying Native North American Art. McCleary, for example, reflected on the difficult experiences she had when viewing objects from her own tribe, the Crow Nation of Montana, at the Yale University Peabody Museum. Such objects had previously been mislabeled. A member of the audience and current Yale Bachelor of Architecture Studies student, Charelle Brown (’20), added that she too had felt concerns with the display of objects “behind glass” from her and other Pueblo communities previously mislabeled at the Peabody.

An audience member asked how the student curators plan to address decolonization while working within a colonial setting. Alanna Pyke (’19), current student president of the Association of Native Americans at Yale, responded by saying “changes don’t happen overnight and they can’t just happen in the museum,” encouraging others to see the importance of this exhibition in the bigger project of decolonizing history. Shrestinian also relayed that the exhibit offers a chance for “reclaiming these spaces,” an important method of decolonization.