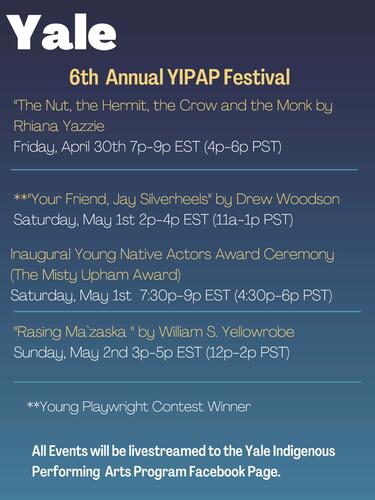 YIPAP is thrilled to announce the winner of the 6th Annual Young Native Playwrights Contest is Drew Woodson (Western Shoshone) for his play “Your Friend, Jay Silverheels.” Drew is a theater and performance studies major at UC Berkeley. His play examines some of the experiences of Native actors working in the theater industry today. It will be performed Saturday May 1st at 2PM EST, directed by Tara Moses (Seminole).

We are also so incredibly pleased to announce the winners of the Inaugural Yale Young Native Actors Award for performers under 25. This award will be named in memory of Misty Upham, for her dream of uplifting more Native Youth in the performing arts. We are so excited to honor Misty’s legacy with this annual award celebrating young Native actors. We were so humbled by all of the talent that submitted this year and we hope that every year this award will inspire more and more Native actors to continue to submit and to pursue their dreams. Winners receive a cash prize, performance opportunities, and a physical award. The selection panel for the award was composed of: Mary Kathryn Nagle (Playwright), Delanna Studi (Artistic Director, Native Voices at the Autry), Asa Benally (Designer), Kenny Ramos (Actor), Tara Moses (Playwright/Director), Claire Burke (CSA, Tara Rubin Casting). Thank you so much to everyone who submitted! All the panelists were so excited by the submissions and to work with all of you as your careers unfold.

There will be an award ceremony on Saturday May 1st at 7:30 PM EST as part of this year’s festival, at which established Native actors Kimberly Guerrero, Sera Lys McArthur, and Delanna Studi will present the awards, and speakers will be featured honoring Misty Upham’s career and legacy. The winner of the inaugural award is Isabella Star Lablanc who is currently filming the first season of “Long Slow Exhale” from Paramount TV Studios and Spectrum Originals.  Isabella has been seen at theaters across the country, including: The Shakespeare Theatre Company in DC; Cincinnati Shakespeare Company; The Jungle Theater; Mixed Blood Theater; Children’s Theater Company; and The Minnesota History Theater.

This year’s winners and finalists are:

All of the events in this year’s YIPAP Festival will be livestreamed to the Yale Indigenous Performing Arts Program’s Facebook page. We look forward to welcoming everyone back in person for next year’s festival.